Members of Israeli army delegation visit concentration camps, meet with German soldiers to discuss Judaism, politics, Islam in Europe. 'We had to salute while German anthem was playing; this was not east,' Major Rabinstein says

Unique delegations of IDF officers, dubbed "Witnesses in Uniforms," continue to fly to Europe. These delegations consist of some 180 IDF officers from various units, including reservists. The delegations visit the concentration and death camps, the ghettos and the old communities of the destroyed European Jewry.

These trips are preceded by extensive studying and preparation that the delegation members undergo, including a tour of Yad Vashem. They study Jewish history in general and specifically that of the Holocaust. Each delegation is accompanied by a Holocaust survivor who adds their personal story and contributes their perspective on the Holocaust.

Major Evyatar Rabinstein was a member of the IDF's 169th delegation, a delegation that met with the German military. Major Rabinstein, 35, is a reserves infantry company commander. He comes from a family of Holocaust survivors. His maternal great-grandfather and great grandmother and many of his mother's family were murdered in the Holocaust. His family originated in the Niscko region, his great-grandfather serving as council member and communal leader, whom he is named after. He shared his unique experience with Tazpit News Agency.

This is not the first time Rabinstein has been on a mission to Poland. As an educator he has led youth groups to Poland. This is his fourth visit in the past five years, yet this last one was very different. "The IDF knew I took a real interest in the Holocaust, and decided to add me to one of their delegations. This is not my first time, but this last trip was very different. Traveling in IDF uniform created a completely different experience. Furthermore, the delegation members were my age, and the discussions during the trip were of a different sort." 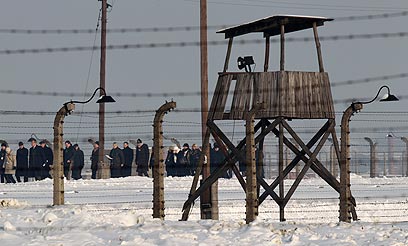 The eight day mission was broken into two segments – an official visit to Germany and a tour of Poland. The IDF delegation members were official guests of the German army. They held a joint ceremony at the cemetery plot for Jewish German soldiers killed during WWII. This included a German honor guard and a military band.

"The German anthem was played during the ceremony. We had to salute as it was playing. This was not easy for everyone. We all did so at the end, out of respect," Rabinstein told Tazpit.

Beyond the official visit, the soldiers from both armies had time to sit together and discuss various issues. They talked about Judaism, politics, Islam in Europe and other pressing issues. "The meeting was awkward at first. We shook hands, which was odd for me. After a while the relations warmed. We discussed our lives and family. I was surprised to discover that they were descent people. They are well aware of their country's dark past. They take responsibility; do not feel guilty, but do not deny it or try to conceal it. They feel it is their duty to ensure that such a catastrophe does not befall humanity again, anywhere. They explained that as a result of German history, it was very unpopular to be a soldier in Germany." Israel's strong bond with Germany were stressed.

The delegation moved on to Poland. Their entrance into Auschwitz was a very charged moment. Rabinstein talks of a sense of great pride when he marched through the infamous main gate to Birkanau, under the guard tower.

"We marched in uniform, in military formation. The procession was led by the Holocaust survivor who accompanied us throughout the trip. She was joined by the mission commander, a soldier carrying the Israeli flag, and a soldier carrying a Torah scroll. I tried to march as erect as possible, imbued with a true sense of pride," he recalled.

"We marched to the train platform where victims would disembark from the train and then be subjected to the infamous selection process. We stood in formation, and the entire mission saluted the Holocaust survivor. That date was of great significance to her. It was her birthday and the anniversary of her arrival at Auschwitz. Many other visitors were deeply moved by this scene."

In general, Rabinstein speaks of a reserved group. "Maybe it's because of the military nature, I'm not sure. There was one moment when everybody broke down. One of the IDF officers got up to speak about her family which perished in the Holocaust only a few feet away from where she was standing. She then called her grandmother, a survivor, now living in Israel. Her grandmother was very moved, as we were all, as she spoke of her pride of Israel and the IDF. Her granddaughter concluded by stating that the lesson learnt here is that we have no other country."

The IDF officers went through Auschwitz with the survivor, hearing her story. The visit was concluded with a very emotional ceremony.

During their trip they visited the remnants of the once splendid Jewish communities of Poland. The officers were ordered to wear civilian clothes during these visits, for security reasons. Security officials are worried that the soldiers in uniform could become targets. This bothered Rabinstein. "It seems that some things haven't changed, even after all these years. We fear to be identified as Israelis, as Jews; but those are the orders."

Two non-Jewish IDF officers were members of the delegation. "The trip was of great meaning to them. They felt a deep connection to Israel. Israel's history and roots are of great importance to them. They wanted to learn about these roots, and pass this knowledge onto their families and relatives."

Although this is not his first trip, Rabinstein came away with new understandings and objectives. "This last trip further clarified the necessity and my desire to educate my soldiers, even though we only meet for short periods of time during our reserve stints. I want to teach them about military history and its lessons, geography and knowledge of the Land of Israel, and the history of Holocaust. This specific IDF delegation also gave me the opportunity to meet with other segments of Israeli society, and that is very important to me.

"Are these delegations important? You don't need to be on one to be a Zionist, but it does contribute to your perception and understanding. As in previous trips, people came back more happy with their lives, closer to their families, country and nation. They came back with a closer bond to the important things, and that is very positive and important," he said.