Secular rebels fighting Assad's forces say Jabhat al-Nusra getting all the credit for liberating bases, taking towns. 'If people think we are all al-Qaeda, then no one will support us'

ALEPPO, Syria - When the jihadist organization Jabhat al-Nusra announced it was joining al-Qaeda last week, Syrians in rebel-held territories cringed. “Now everyone will think our revolution is nothing but a jihadist power grab,” complained 28-year-old Muhammad Ansari. “Who will support us now?”

With the Syrian revolution faltering and secular rebel groups disintegrating amidst infighting and civilian abuses, it is the jihadists who have benefitted most. But the attention they have received from foreigners has angered Syrians who believe these groups have hijacked a secular revolution.

Like many in the town of Ma’arat Numan, Ansari fought to dislodge regime troops hunkering down in the city center last year. Since then the municipality has endured months of punishing airstrikes by regime fighter jets and long- range shelling. For most of the ordeal, it was homegrown rebels who were directing the fight. But recently, Jabhat al-Nusra fighters have poured into the town, hoping to turn it into a base. Ma’arat Numan connects a number of cities in northwest Syria, making it a key locale coveted by the warring parties.

“We don’t want them here,” shouted 35-year-old Ahmad Fartawi when queried about the organization. “We don’t want them in our revolution. These people don’t help our cause,” the computer peripherals salesman explained bitterly while biting into a falafel sandwich. Fartawi and others are angry Jabhat al-Nusra is getting all the credit for liberating bases and taking towns. They claim it is the secular Free Syrian Army (FSA) which is responsible for the gains the opposition has made. In this city, where Jabhat al-Nusra has a higher public profile, many admire the organization. But they are just as worried by the organization’s affiliation with al-Qaeda. For months, Samir Maliki nodded with approval when the organization's name was mentioned. They helped him adjudicate a land dispute. “They are very efficient, very good,” explained the 51-year-old landlord in January. 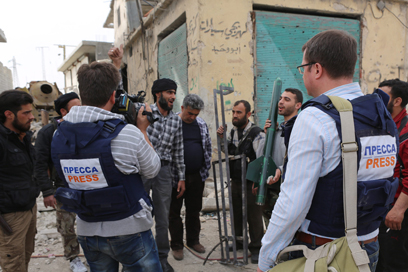 But as the battle for Syria’s second largest city became a stalemate and the international community stepped up its concerns about Jabhat al-Nusra’s influence, Maliki began having second thoughts about the organization. “We in Syria welcome everyone from the other religions,” he noted. “But we don’t want sectarian killing and Islamic emirates.” Now, with the announcement that the organization is joining al-Qaeda, Maliki has turned against it, claiming that it is a black stain on a pure white revolution.

Others in the city are equally concerned that the negative publicity Jabhat al-Nusra is bringing them will derail their support in Western capitals. “Westerners already don’t like the revolution because they think we will not keep the peace with Israel like (President Bashar) Assad has done,” says 43- year-old-pharmacist Walid Awajli. “If people think we are all al-Qaeda, then no one will support us.” It is a problem American policy is driving home. A recent "Wall Street Journal" article noted that the administration has informed Congress that it does not want the rebels to overthrow the regime now because it fears the jihadists will take over the country. Though such sentiments are turning Syrians against Jabhat al-Nusra, they are also increasing anti-Western hostility. “The Jews who support Assad don’t want us to overthrow him,” says 51-year-old truck driver Hamid Shufi. “They know Assad has been protecting Israel. So they tell (President Barack) Obama that the rebels are al-Qaeda.” More level-headed Syrians are just as angry with the United States. “If Obama had given us weapons, then the jihadists would have never come,” explains 49-year-old technician Salih Hamid. “Now everyone is mad not only because Obama did not help us, but also because revolution has been transformed into a jihadist adventure.” Members of the Tawhid Brigade, the FSA’s largest contingent in Aleppo, agree. “The revolution has been hijacked by the jihadists,” laments a member of its military council who goes by the name of Abu Fadi. “They control everything – the weapons, the food, the strategy. We are losing to these outsiders.” Though Abu Fadi admits that the Tawhid Brigade and other FSA units have joined forces with Jabhat al-Nusra in the past to attack regime bases, he now regrets it. “We legitimized them,” he grumbles outside a Tawhid base that was once a school. “We showed them how we operate.” Today Jabhat al-Nusra is operating so well in the revolutionary jungle that it no longer needs its former secular allies to help the organization navigate the mayhem. And that has everyone here worried.