Op-ed: We can already draft apology US will issue in decade or two for not helping tens of thousands of Syrian citizens

Last Thursday a senior American official in the White House, in a missive to Congress, attempted to say something without actually saying it. He admitted that the US administration believed with some degree of varying confidence that the Syrian government had used chemical weapons, but that it still needed concrete evidence to establish a definitive judgment as to whether or not the red line has been crossed.

The affair began with a declaration by the head of Israel's Research Division at Military Intelligence, Brig. Gen. Itai Brun, that Syrian President Bashar Assad’s regime had used lethal chemical weapons, apparently sarin gas, against the rebels on a number of occasions. The US government’s response was denial. Israel's intelligence community was shocked and livid, since it appeared that Israel and the US were in agreement regarding the intelligence that had been gathered on Syria's use of chemical weapons.

After a few angry phone calls, the Americans indeed remembered that they agreed, and were forced to admit, half-heartedly, that Brun was right. But the verbal flick-flack by top US officials on the matter stemmed not only from embarrassment, but from a much more serious problem.

The American officials did not want to lie, but they also did not want to announce that Syria has made use of chemical weapons - because about a year ago, President Obama stated that such an act would draw a harsh American reaction, the nature of which he did not specify. Therein lies the American dilemma: The administration doesn't want to intervene in Syria, just as it did not want to intervene in Egypt and Libya. As far as Obama is concerned, the dangers involved in getting the US mixed up in Syria are grave. The president found an excuse to stay out of Syria and set a red line, one that most of those who are familiar with the issue (yours truly included) did not believe Assad would ever cross – the use of weapons of mass destruction. Apparently, this was a mistaken assumption. 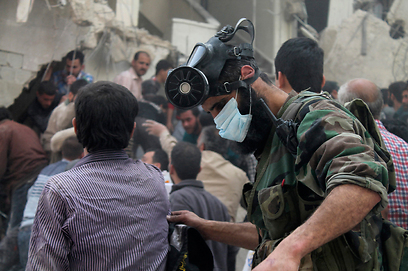 The red line was ridiculous to begin with. First of all, what exactly constitutes the crossing of the red line? What if it turns out that chemical agents accidentally leaked from a Syrian army truck while being transferred from one location to another, killing the driver? Would this mean Syria crossed the red line? And more importantly: Why is it that the deaths of some 70,000 or more Syrians –not from mustard or sarin gas – do not warrant the international community's intervention, but that proving beyond a doubt that one person was killed by chemical weapons warrants US intervention tomorrow? In Rwanda they used machetes to kill around 1.5 million people. Should the international community have refrained from intervening there as well?

Now, after getting caught in a bind with its red line, the US administration is trying to shirk its commitment, saying more proof is required. All of a sudden, the administration, which always relied on its own intelligence assessments and ignored UN resolutions (when it was convenient), is calling on the UN to investigate the issue. This is not an innocent request. The US administration is aware that the UN does not have its own intelligence capabilities and relies on the work of inspectors; but Assad is not allowing these inspectors into Syria. Therefore, the demand for a UN investigation is actually another attempt to buy time without explicitly stating that Assad is a chemical terrorist. During the massacre in Rwanda, the UN and the US refused to intervene despite the numerous reports coming out of Africa. In his book, Kofi Annan, who served as force commander of the United Nations Assistance Mission for Rwanda, said he made a grave mistake and that the lesson he drew from the massacre was that the international community must intervene immediately whenever genocide takes place, and not wait for diplomacy. In 2000, the US apologized for its disgraceful conduct during the massacre. America apologized, but it did not learn its lesson. We can already draft the apology the US administration will issue in a decade or two for not coming to the aid of tens of thousands of Syrian citizens killed in the civil war.