After Finance Minister Yair Lapid presented his long list of economic measures as part of his proposed budget, sources affiliated with Prime Minister Benjamin Netanyahu said that the PM insinuated Tuesday that he might be introducing some changes to the proposed budget. Though Netanyahu, currently on a visit to China, has formally expressed his support for Lapid's economic plan, he reportedly implied, during a closed meeting, that he would cancel some of the measures.

During the meeting, Netanyahu said that it was not impossible that the list of measures presented by Lapid would still undergo changes before being fully authorized. Netanyahu has yet to formally comment on the budget cuts and austerity measures planned for 2013. His party member MK Ofir Akunis, however, wrote on his Facebook page: "The Finance Ministry has yet again proved its generosity when it comes to economic measures it is willing to inflict upon the public, but not everything published (Tuesday) will be authorized. The road to a responsible budget is still long."

The Senior Citizen Minister Uri Orbach was the first minister to respond to the proposed budget, saying "We will not leave the seniors to fight the finance ministry's horrible edicts on their own." He further called on the Habayit Hayehudi faction to congregate for an emergency meeting to discuss opposing the current budget formulation.

Opposition Chairwoman Shelly Yachimovich also commented on the budget Tuesday, invoking Netanyahu's infamous UN bomb illustraion (or "Bibi bomb"), saying "Mr Finance Minster, this is a bomb, this is a red line; if this is your new politics, then I already miss the old kind." 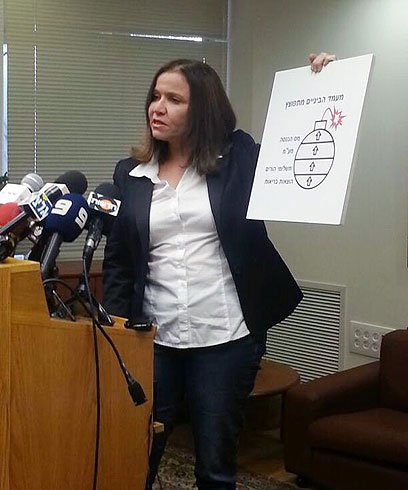 Yachimovitch: This is a bomb, this is a red line

At a special press conference, Yachimovitch called the budget "cruelty for the sake of cruelty; a betrayal of the public and an economic mistake which will throw the Israeli economy into a recession."

Holding up an image of a bomb, the opposition leader continued to slam the proposed budget saying: "This is not an economic growth program, this is not a proposal of hope, this is a program of recession and depression.

"The deficit was born out of a drop in the amount of taxes collected by the State, yet no one dares to touch the tycoons' capital reservoirs. The rise of living costs and the constant erosion of salaries have hit the middle class the worst, so that they have stopped buying and stopped paying taxes, this is a lethal policy promoted by Netanyahu; a policy which Lapid, in the past, had also decried.

"Now, despite his pretense to represent something new, he is in fact a more shameless, more brutal and crueler copy of Netanyahu. What Lapid is doing is moving the deficit from the government's pocket to that of the Israeli public."

MK Eitan Cabel (Labor) also slammed the budget, and compared Lapid to Passover's Haggadah pharaoh: "Pharaoh punished only the firstborns, but Lapid is punishing all of us – he raises income tax for public sector workers, he raised VAT to 18%, slashed children stipends, placed a tax on housewives, and attacked the salary of public secotr workers. "Yesterday (Monday) night, the mask was finally removed, this is not new politics; this is old politics at its worst. Lapid the campaigner promised to be the middle class's Shas; Lapid the finance minister chose to be its hangman. MK Itzik Shmuli, another Labor member of Knesset, slammed the finance minister's economic plan from the Knesset's podium, saying: "Lapid at 2013 is just a sweetened up, revamped model of Benjamin Netanyahu circa 2003. "Every middle class family will pay an additional NIS 8,500 ($2,383) annually because of these austerity measures, and all the finance minister is doing is praying that in two-years time things will improve."