The measure cannot be implemented without King Abdullah's approval.

The non-binding vote came after Israel limited the entrance of Muslim worshipers to the Temple Mount on Tuesday and allowed Jews to visit the compound on the occasion of Jerusalem Day, which continued into Wednesday. 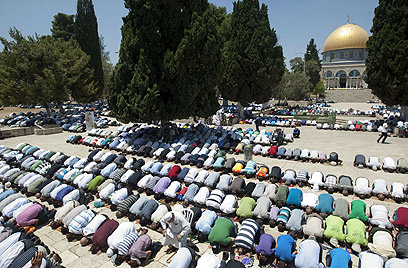 The vote came in response to "the continued assaults by Jewish settlers at the Al-Aqsa Mosque" and "Israeli attacks in occupied Jerusalem."

The Jordanian MPs called the decision "historic" and claimed the government must implement it. Jordanian Prime Minister Abdullah Ensour was quoted by the news portal Ammon as saying the "attacks" on al-Aqsa Mosque by Israeli security forces and settlers were "premeditated and foretell of evil intentions." He said "the government views with great severity Israel's actions yesterday and today as well against the Al-Aqsa Mosque and the places that are holy to Islam and Christianity in Jerusalem." Last month 110 Jordanian MPs from the lower house signed a petition calling to pardon a Jordanian soldier who shot and killed seven Israeli schoolgirls in 1997.

Ahmad Musa Mustafa Daqamseh shot the girls during a school fieldtrip in Naharayim, near the Israel-Jordan border, and is currently serving a life sentence.