Rabbi Dov Lipman was inspired to initiate constituent meetings by his experience as intern in Congress. 'It’s fantastic that we an English speaker to go and speak to,' CEO of Eddie’s Kosher Travel says

The Israeli parliament, or Knesset, is quiet on Sundays. The plenum does not meet, and the carpeted hallways are silent. But at the end of one corridor, in Room 2021, there’s a lot of foot traffic in and out of Rabbi Dov Lipman’s office.

Every 10 minutes, an aide escorts the next petitioner into the office. Most have never met Lipman. They have all made appointments through his office, and each is here with a different issue.

“The government is planning to start imposing an 18% Value Added Tax (VAT) on tourists,” David Walles, the CEO of Eddie’s Kosher Travel told The Media Line as he waited for his appointment. “I think it’s a huge mistake. I want him to understand what it will mean for businesses like mine that live off tourism.”

At the same time, he says that he is pleased that he found someone in the Knesset to talk to. “It’s fantastic that we have someone to go and speak to – an English speaker who will pay attention to the needs and issues the Anglos in Israel face,” he said. 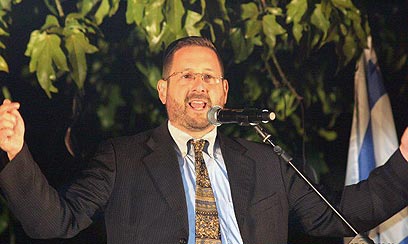 Walles said that during the recent Passover holiday, his company brought some 2500 Orthodox Jews from abroad to hotels in Israel for the holiday. That alone generated millions of dollars in money spent in Israel, he said, and imposing VAT could easily deter these visitors.

Lipman is from the Yesh Atid party, and it is the party head Yair Lapid, who is Israel’s finance minister and the man proposing the plan to impose VAT on tourists. In an interview with The Media Line, Lipman says he can’t imagine that he or any of the 19 Yesh Atid parliamentarians will vote against the budget. Next on line are Diana and David Rose, recent immigrants from London. They’ve made the two-hour trip from Herzliya, north of Tel Aviv to offer some suggestions on how to improve the process of immigration to Israel. She moved to Israel with her mother, and her children and grandchildren are already here. “We’re here 12 weeks today,” Diana Rose says with a smile, “and we have some suggestions on how to improve the immigration process. We’re not here to complain, only to offer some constructive suggestions.” For example, she says, the Israeli government insists that new immigrants comb past passports to manually list all past entries into and exits from Israel when the Interior Ministry already has that information on computer. In addition, it is not possible to open a bank account before arriving in Israel, or attend to many of the bureaucratic details needed. Next is an American-born rabbi, Brian Thau, who wants Lipmans help in establishing a new program for American Orthodox high school graduates in Israel. Another appointment, Beth Steinberg, the co-founder and executive director of Shutaf, an organization that provides programs for children with special needs, said she was impressed with Lipman. “What was great was that the discussion was not superficial,” she told The Media Line. “We found him very engaged and curious. We talked about how kids are identified, labeled and served and what we think needs to change. He is planning on talking about us in the Knesset and inviting other members to come with him for a visit.” Lipman, the only current American-born Knesset member, said he was inspired to initiate these constituent meetings by his experience as an intern in Congress many years ago. “I answered letters for Congressman John Dingell in Washington,” he tells The Media Line. “I saw people coming in all of the time to meet with the Congressman and I thought it was very important to do that in the Knesset too.” Dingell, by the way, is the longest-serving member of Congress currently in office, and has been there for 57 years. Next month, he will become the longest-serving Congressman in American history. One of the major differences between the Israeli and American political systems is that Israelis vote for national political parties, not individuals. Lipman says most of those coming to meet him are English speaking Israelis, part of the 100,000 “Anglos” who live in Israel. “Some from the ultra-Orthodox community want help getting a job,” he says. “Others are having problems with the Israeli bureaucracy or want to introduce their organization to me. I listen, take notes and try to follow up.” He said that unlike letters from the public, letters from a Knesset member are always answered, and government bureaucracies are more responsive. In many ways Lipman is an anomaly in the Israeli political system. He is an ultra-Orthodox rabbi who belongs to a new secular party, Yesh Atid, which surprised everyone by winning 19 seats in the 120-seat Knesset. He is an educator with little political experience. And he had to renounce his American citizenship to become a parliament member. “It’s Israeli law but it was really really hard for me,” he said recalling his visit to the US Consulate in Jerusalem soon after being elected. “I teared up a little when I did it, but I know it was the right thing for me.” Lipman would like to see all Knesset members adopt his policy of opening his office to anyone who has something to say to him. Article written by Linda Gradstein Reprinted with permission from The Media Line