Complainant exposed: I am Orly Revivo, A. from President’s Residence

She was first to come forward, opening chapter that brought end to term of President Moshe Katsav, who was later indicted for rape. Until today, she was known only as A. In film soon to be aired on Channel 10, she shows her face, talks openly about what happened within walls of President’s Residence

She was not included in the indictment issued against former President Moshe Katsav, but A. from the President’s Residence, became the leader in the fight against Katsav when she sat in front of cameras and with her face hidden, gave witness, talking for nearly an hour.

Now, six years later, A. is again in the headlines, appearing in a new film directed by Anat Goren, and set to broadcast on Channel 10 in the coming weeks. Her face and name, hidden for so long, are now both public, and her experiences with Katsav, once her testimony, have now become her story.

“He leaned me back on the desk,” she said, “I said to him, ‘Moshe, I don’t want this! I don’t want this!’ I remember I just cried. Clothes came off … there was full … rape. He always threatened, ‘If you make even a small sound, I will push the alarm button and tell the security that you tried to attack me.’"

Revivo related a conversation she had with Gila Katsav, the wife of the former president. “I called (Gila) when I was in the US, she began to cry. She said to me, ‘What, you too?’ I forgive you.'"

In a press conference which took place several years ago, Revivo gave details regarding what took place at the President’s Residence. "Moshe Katsav is a rapist. Moshe Katsav is a serial sex offender, he's perverted. He is an unstable figure and no one can tell me otherwise," Revivo said.

“It began with telephone calls, ‘Have you woken up this morning? What are you going to wear this morning? Maybe wear a skirt? A skirt with no underwear? You amaze me, I dreamt about you last night while I was having sex with my wife, Gila. You are a sexy woman,” she quoted Katsav as saying. 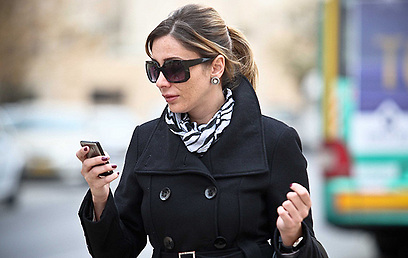 Revivo also said, "This is a man who every morning would sit there at his desk and take out his penis and stroke it and then ask me to sit beside him and touch it."

"I struggled to get free but failed, I just felt completely paralyzed. He slammed me into the corner of the table with his hands pinning down mine. He opened the clasp of my pants, I tried to move but couldn't, he's a very strong man, people don't know him. He dropped his pants and had full intercourse with me," she said.

During the period when Revivo’s name was censored, rumors tied her to soccer player Haim Revivo, but the two have no familial relationship.