During meeting with high schoolers, Israelis who moved to German capital asked if they have any Palestinian friends and if all Israelis are religious

During the workshop "Israelis in Berlin," German high schoolers had the chance to meet “real” Israelis and understand their fascination with the German capital.

Nirit Bialer, 34, moved to Berlin about seven years ago. She fell in love with the German city as an exchange student. “I don’t know what my grandparents would have said if they were still alive and knew I live in Berlin,” she was quoted as saying by the Berlin-based left-wing newspaper taz.

Bialer’s grandparents had to flee from Germany to Israel during the Second World War. Today, Jewish history is still visible in Berlin, a city whose streets are sprinkled with Stolpersteine, small memorials the size of cobblestones embedded in the pavement. “When I talk to Germans, the first topic is either the conflict with Palestine or inevitably the Holocaust”, said Bialer. 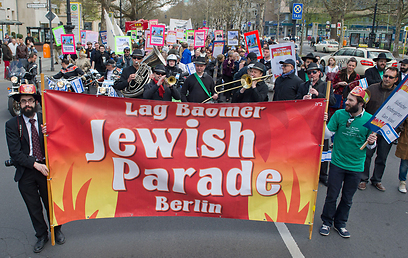 Bialer was one of nine Israelis who agreed to meet 100 students from a high school in Berlin-Schoeneberg. After their exchange, the pupils created portraits of every single Israeli participant. The pictures are now exhibited in the Youth Museum of Berlin. Among other things, Bialer was asked if she is aware that Gaza is only an hour away when she lies on the beach in Tel Aviv, if all the Israelis religious Jews and whether she has Palestinian friends?

“Many of them wanted to hear about my experiences in the army, especially about how it is for a woman”, said Bialer. “And they wanted to know if I am proud to serve my country”, she added.

Yet, they were also interested in Bialer’s life in Berlin: “What do you do in order to feel at home in Berlin?” they asked.

“I am what I am, either I fit into a place or I just don’t”, Bialer replied.

Also, for many of the students selected, assimilation is one of the major daily issues. “A lot of the children are from immigrant families”, said Petra Zwaka, the head of the exchange project, “so, they are very interested to hear about the experiences of a recent immigrant, especially one with a different religious background."

According to the German newspaper, many young Israelis have moved to Berlin over the past few years: The German capital is cheap, open and dynamic; artists and students find a suitable working and living environment that still contains traces of Jewish past. Many constraints and obstacles of the life in Israel just disappear in Berlin; the urban melting pot brings together people from all religions and ethnic origin. In Berlin, there is space to breathe."