In Jordan, Peres calls for return to peace talks

Israel's president on Sunday urged Israeli and Palestinian leaders to overcome differences and resume peace negotiations, saying the sides could not afford "to lose this opportunity."

President Shimon Peres issued his call ahead of a gathering of Mideast leaders on the sidelines of a World Economic Forum meeting on the shores of the Dead Sea in Jordan. Sunday's meeting was expected to include a rare face-to-face meeting between Israeli and Palestinian leaders, along with the participation of US Secretary of State John Kerry, who has devoted much of the past two months to restarting long-stalled peace talks.

"We shouldn't lose the opportunity because it will be replaced by a great disappointment," Peres told reporters in Jordan. "For my experience, I believe it's possible to overcome it. It doesn't require too much time." 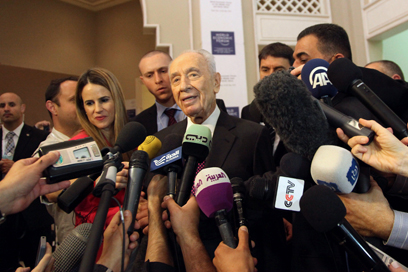 Palestinian-Israeli peace talks broke down nearly five years ago, in large part due to disagreements over Israeli settlement construction on occupied territories claimed by the Palestinians. The Palestinians say there is no point in negotiating while Israel continues to build Jewish settlements in the West Bank and east Jerusalem, undermining their quest to set up an independent state. The Palestinians want both areas, captured by Israel in 1967, as parts of a future state.

Kerry, who met with Israeli and Palestinian officials last week during a swing through the region, said both sides must make hard decisions to move toward direct negotiations.

Peres, who won the 1994 Nobel Peace Prize for helping forge an interim deal with the Palestinians, sounded upbeat and determined to help in peacemaking with Palestinians.

"It is time for peace," he said. "I believe this is an important opportunity to (engage), not to waste time, return to negotiations and complete the negotiations with the Palestinians."

He said a peace agreement must be "based on a two state solution: an Israeli state, a Palestinian state living as good neighbors cooperating economically and bringing a message to the young generation."

Traditionally an ardent supporter of peace with the Palestinians, Peres holds a ceremonial role in Israel. But his views are highly respected in Israeli society. Prime Minister Benjamin Netanyahu, who has most decision-making powers, holds more hawkish positions than Peres and has given few signs of how he sees a final peace deal with the Palestinians.

Israeli media reported that the president discussed with Netanyahu some key issues he is expected to raise at Sunday's forum.

Peres has scheduled meetings with Jordan's King Abdullah II, whose country maintains cordial ties with Israel under a peace treaty signed in 1994, and possibly Palestinian President Mahmoud Abbas , who is also attending the WEF.

Chief Palestinian Negotiator Saeb Erekat told the conference in Jordan that Israel must retreat to the borders of 1967 and halt settlement construction. He said those represented not preconditions but rather obligations.

Asked about President Peres' statement to the effect that most Israelis support a withdrawal to the 1967 borders, Erekat replied that it is the government, rather than the president, which is responsible for policymaking in Israel.

On his fourth visit to the Middle East since taking office in February, Kerry held talks with Netanyahu and Abbas last week. Jordanian officials said privately he was expected to meet Peres and Abbas while in Jordan.