A few hours after Yesh Atid Chairman Yair Lapid threatened to withdraw his faction from the coalition in the event that the Likud-led government fails to approve new legislation mandating conscription for the ultra-Orthodox, Prime Minister Benjamin Netanyahu urged Defense Minister Moshe Ya'alon not to delay the bill, despite his objection to imposing automatic criminal sanctions against draft dodgers.

"If needed, we'll discuss the (sanctions) clause at a later stage of the legislation process," Netanyahu told Ya'alon Monday evening. The PM also said that at some point down the line the government would check to see that the universal enlistment bill does not violate any coalition agreements signed following the January general elections.

"It would not be right to delay the bill at this time," Netanyahu said. "The political crisis is imaginary. The gaps are not that wide anyway."

During a Likud faction meeting earlier in the day, Ya'alon said the proposed legislation was "different from the platform Yesh Atid during its election campaign. Yesh Atid wants to ignite the haredi street; I will not lend a hand to this." 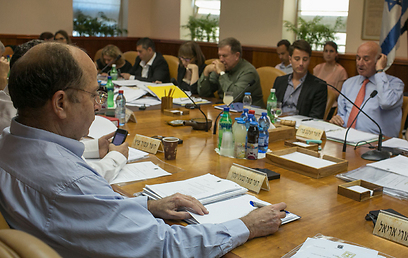 Speaking before the Peri Committee, which is tasked with formulating a universal enlistment bill, Ya'alon explained his objection to penalizing draft dodgers. "The correct way is not through delegitimization and hatred or talking about sending those who learn Torah to prison; without sanctions and without threats,” he said. "There is no full equality in it – this is true – but it's the only way to make them (haredim) take responsibility."

The minister said most of the ultra-Orthodox and members of minority groups should be obligated to perform civil service.

During a meeting of the Yesh Atid faction Monday, Lapid said "We will not sit in a government not willing to move on the issue of an equal share of burden. There is an historic opportunity to right an historic wrong, a bleeding wound in the heart of Israeli society. Whoever is out to compromise this opportunity in order to make political gains undercuts Israel, Zionism, the IDF and every young Israeli who has ever entered an induction center."