At Jerusalem conference, British-born Muslim compares KKK rallies in US to anti-Israel protests in London. 'During my visit I saw Israel wasn't some apartheid state,' he says

Two of the panel speakers included Kasim Hafeez, a British Muslim who runs The Israel Campaign and Rev. Majed El Shafie, a human rights advocate originally from Egypt. Ahmad Mansour, a Palestinian living in Berlin, who is a policy advisor for the European Foundation for Democracy, was also scheduled to speak but was unable to attend.

"When people say that anti-Semitism exists in the Muslim world because of Israel, that is simply an excuse," says Kasim Hafeez, born in Britain to a Pakistani Muslim family.

"People here (in Israel) get Islamic anti-Semitism. In Europe, we deny it," Hafeez expounded. "As a university student, I would attend radical anti-Israel rallies in Trafalgar Square. Here I am standing in London in the middle of a European capital - chanting 'death to Israel' and nothing was ever done." He compares those rallies with the Ku Klux Klan. "An Al-Quds Day rally in London is equivalent to a KKK rally in the US," he stressed. Hafeez told Tazpit News Agency that he began to change his thinking when he read A Case for Israel, by Alan Dershowitz. Hafeez explains that he read the book in order to learn how to further deconstruct Zionist propaganda. "But I began to see that I could no longer support my convictions because I had no answers to the arguments that were made for Israel," he explains. "I found that the radical Islamic doctrine that I grew up with and my own belief in violent jihad could no longer support the truth I once believed in." That realization prompted Hafeez to visit Israel. "I kind of hoped that the visit to Israel would be a negative experience, that it would enable me to go back to my former beliefs," he told Tazpit News Agency.

But the visit was eye-opening for Hafeez, who says he fell in love with Israel during his first trip. "It's hard not to support Israel," says the soft-spoken Hafeez, who recently participated in the Jerusalem Marathon. "I encountered Israelis who weren't anti-Arab, or anti-Islam and saw that this wasn't some apartheid state." 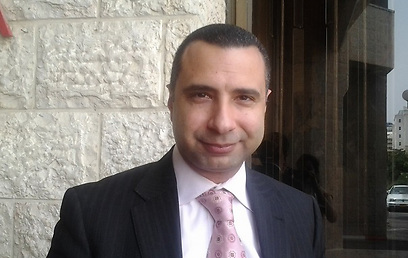 However, coming out in support of Israel hasn't been easy. Hafeez has become isolated from his friends. "It's a lot of hassle – it really disrupts your life when you become vocal and open about your support for the Jewish state."

"What people don't understand, is that it doesn't matter if you bend over backwards for radical Islamists. If you are Jewish, they will hate you no matter what," Hafeez said. Rev. Majed El Shafie, the founder of One Free World International (OFWI), a leading organization which advocates for religious minorities globally, echoed similar sentiments. A Muslim who converted to Christianity, he found political asylum in Canada and believes that the silence of moderate Muslims is more dangerous than the rise of extremists. “They (moderate Muslims) must speak up,” says Rev. El Shafie. “Anti-Semitism is everyone’s problem. The moderate Muslims don’t understand that after the radical Muslims finish with the Christians, Bahai, and Jews, they will come after them. The minute we stop fighting for each other, we lose our humanity,” he added. Rev. El Shafie believes that education is the solution to radicalization and is the only way to bring forth democracy in the Middle East. "The Arab Spring is a cold deadly winter. Whoever came up with the term 'Arab Spring' must have been a guy in a suit behind a desk who had no idea what was really going on." "Today all these dictatorships that have been overthrown are filled with extremist governments. There is no separation of religion and state and no freedom of religion in the Middle East. Education must come before democracy" As for Israel, Rev. El Shafie declares that there are two things that the Jewish state cannot be questioned for. "When Israel's right to exist and Israel's right to defend itself, come into question, a line has been crossed," he stated. "The new anti-Semitism today is to hate Israel."