Syrian civil war spills into Lebanon: Eighteen rockets and mortars rounds from Syria slammed into Lebanon on Saturday, the largest cross-border salvo to hit a Hezbollah stronghold since Syrian rebels threatened to retaliate for the Lebanese terror group's armed support of Syrian President Bashar Assad. On Sunday two rockets exploded in a Hezbollah-controlled area of Beirut.

The rockets targeted the Baalbek region, the latest sign that Syria's civil war is increasingly destabilizing Lebanon. On Friday, the Lebanese parliament decided to put off general elections, originally scheduled for June, by 17 months, blaming a deteriorating security situation in the country.

In Qatar, an influential Sunni Muslim cleric whose TV show is watched by millions across the region, fanned the sectarian flames ignited by the Syria conflict and urged Sunnis everywhere to join the fight against Assad.

"I call on Muslims everywhere to help their brothers be victorious," Yusuf al-Qaradawi said in his Friday sermon in the Qatari capital of Doha. "If I had the ability I would go and fight with them." "Everyone who has the ability and has training to kill ... is required to go," said al-Qaradawi, who is in his 80s. "We cannot ask our brothers to be killed while we watch." He denounced Assad's Alawite sect, an offshoot of Shiite Islam, as "more infidel than Christians and Jews" and Shiite Muslim Hezbollah as "the party of the devil." He said there is no more common ground between Shiites and Sunnis, alleging that Shiite Iran - a longtime Syria ally that has supplied the regime with cash and weapons - is trying to "devour" Sunnis. The Syrian conflict, now in its third year, has taken on dark sectarian overtones. It has escalated from a local uprising into a civil war and is not increasingly shifting into a proxy war. Predominantly Sunni rebels backed by Sunni states Saudi Arabia, Qatar and Turkey are fighting against a regime that relies on support from Alawites, Shiites and Christians at home, and is aided by Iran and Hezbollah. The Syria conflict is also part of a wider battle between Saudi Arabia and Iran for regional influence.

Sunni fighters from Iraq and Lebanon have crossed into Syria to help those fighting Assad, while Shiites from Iraq have joined the battle on the regime's side.

Western officials said the number of Hezbollah terrorists taking part in the Syrian war is lower than previously estimated. They claimed only about 2,000 Hezbollah men are fighting in Syria, not several thousand.

Sectarian tensions rose sharply when Hezbollah stepped up its involvement in the war in mid-May by joining a regime offensive against the rebel-held Syrian town of Qusair, about 10 kilometers (six miles) from Lebanon. The town has since become one of the war's major military and political flashpoints, with international concern growing over civilians believed to be trapped there.

On Saturday, the International Committee of the Red Cross and the United Nation's two top officials dealing with human rights and humanitarian issues said they were alarmed by reports that thousands of civilians are trapped in Qusair and that hundreds of wounded people are in urgent need of medical care. 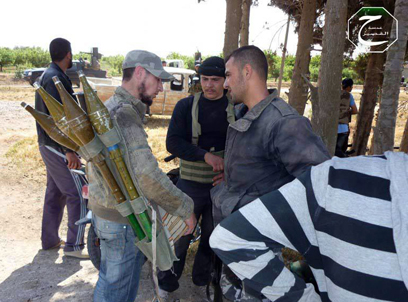 Syrian rebels in Qusair (Photo: AP)
The UN officials called for a cease-fire to allow the wounded to be evacuated. They said more than 10,000 people have fled to two nearby towns and need food, bedding, water and medical care. The Red Cross said it has requested access to Qusair and is prepared to enter the city immediately to help the civilians there. Syria's political opposition cited Hezbollah's role in the war and the dire situation in Qusair as reasons for not attending peace talks with the regime in Geneva, which the US and Russia had hoped could be launched at an international conference this month. 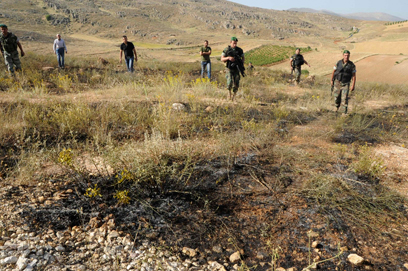 Qusair has also become a rallying cry for rebels demanding Western weapons shipments, with the commander of the main Western-backed rebel group warning this week the town could fall soon if such arms are not delivered.

A regime victory in Qusair would deal a demoralizing blow to the rebels and solidify Assad's control over the central province of Homs, the linchpin linking the capital Damascus with the Alawite strongholds on the Mediterranean cost. For the rebels, holding the town means protecting their supply line to Lebanon. Rebels have sent reinforcements to the town to try to stem the regime advances. Both sides have suffered heavy casualties. Meanwhile, Hezbollah's role in Syria set off a mounting backlash from the rebels who threatened to target the militia's bases in Lebanon if the militant group does not withdraw its fighters. Over the past week, Syrian rebels have fired dozens of rockets on Lebanon's northeastern region of Hermel, across the border from Qusair, but Saturday's attack was the first on the Baalbek region, a Hezbollah stronghold. Sixteen rockets and mortar rounds hit Baalbek early Saturday, igniting fires in fields but causing no casualties. Lebanese security officials, speaking on condition of anonymity in line with regulations, said the villages of Yanta, Brital and Saraeen were among the areas struck. Lebanon's National News Agency said two more rockets hit the Baalbek area on Saturday evening. Also Saturday, gunmen opened fire on a Shiite shrine in the town of Baalbek in an attack that could worsen frictions between Lebanon's Shiites and Sunnis. The shrine of Sayida Khawla, a great granddaughter of the Prophet Muhammad, was attacked shortly after midnight, a security official said. Lebanon and Syria share a complex web of political and sectarian ties and rivalries that are easily enflamed. Lebanon, itself plagued by decades of strife, has been on edge since the beginning of the Syrian crisis, which began as mostly peaceful protests against Assad's regime but later degenerated into all-out civil war. Some Lebanese Sunnis support the Syrian rebels, while some Shiites back Assad's regime. In the majority Sunni city of Tripoli in northern Lebanon, Sunnis backing the rebels and Alawites supporting Assad have repeatedly fought each other with rockets and grenades. Hezbollah chief Hassan Nasrallah has firmly linked the militia's fate with that of the Assad regime, but in a speech last week also pledged to keep the fighting out of Lebanon. Still, a senior Hezbollah commander, Nabil Kaouk, said Saturday that "we will not be silent and will not stand idle" in the wake of Syrian rebel attacks on Hezbollah targets. He spoke during a memorial service for a slain Hezbollah fighter and his comments were carried on the website of Hezbollah-owned Al-Manar TV. Fawaz A. Gerges, director of the Middle East Center at the London School of Economics, said he believes Hezbollah has made a strategic decision that the battle is in Syria, not Lebanon. "If Hezbollah is provoked, I don't expect it to allow itself to fall into the trap" of responding, he said. At the same time, the al-Qaradawi comments "are pouring fuel on a raging fire," Gerges said.

The cleric is "putting a sectarian stamp on an essentially geostrategic struggle between Saudi Arabia and Iran," he said.

A senior Israeli military officer said on Thursday the IDF tracks every heavy missile fired in the Syrian civil war, keen to study Damascus's combat doctrines and deployments, and ready to fend off a feared first attack on Israeli territory.

Colonel Tzvika Haimovich of the air defense corps said southward launches against Syrian insurgents by President Assad's forces gave Israel mere seconds in which to determine it was not the true target - a distinction that could prove crucial in warding off an unprecedented regional conflagration.

"Syria's batteries are in a high state of operability, ready to fire at short notice. All it would take is a few degrees' change in the flight path to endanger us," he told Reuters in an interview at the air base in Palmachim, south of Tel Aviv.

Syrian opposition activists say Assad's army has fired dozens of devastating Scud-type missiles at rebel-held areas in the last six months, out of a ballistic arsenal believed to number in the hundreds.