"Real progress" has been made, US Secretary of State John Kerry announced following his meeting with Palestinian President Mahmoud Abbas in Ramallah. ”We have had very positive… important discussions, for the last few days. We agree we have made real progress, but we have a few things we need to work on," he said.

"Positive, important progress" are the most common words in the diplomatic dictionary (Kerry forgot "constructive"). This is what Western foreign ministers say after another frustrating meeting with a Middle Eastern politician. The words are said without any connection to what is really going on during the talks. Any other word, a more genuine word, could make them responsible for the collapse of discussions.
Peace Efforts
Blood near baby's cot
Matthew Gould
Op-ed: UK ambassador says Israel must believe that when occupation ends it will find a peaceful neighbor in West Bank
Blood near baby's cot
Kerry says what he is required to say. And this is fine. The only concern that is that he might actually believe what he is saying on occasion. If this is the case, then we have a problem. Shimon Peres says the way to advance negotiations in the Middle East is to confuse the sides. Each side enters the negotiations convinced that it will get something out of them, and until it understands what is going on it is already immersed in the process. Peres' method worked pretty well while he was in charge of the process, but it has long since been exhausted. It has been exhausted because during the 20 years since Oslo both sides have studied each other and are all too familiar with each other's strategy, tactics and shticks. The actors in this play of the millennium are always the same actors: Abbas and Erekat, Netanyahu and Molcho. The audience is the same audience, only the identity of the cashier changes from time to time – sometimes its Obama, and at other times it can be Mitchell, Hillary Clinton or Kerry. There is no shortage of conflicts between countries and nations in the world, but the Israeli-Palestinian conflict is unique – apart from the fact that it has been continuing for more than 100 years - in that both sides know in advance how the agreement, if it is ever reached, will look like. They know, but they are not willing to pay the political price. They are too spoiled. 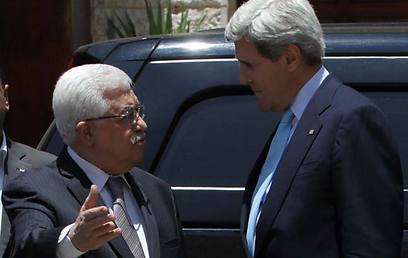 Kerry entered this fox's den with great ambition. He chose to follow the diplomatic path taken by his predecessors: Intensive shuttle diplomacy between Jerusalem, Ramallah and Amman; discussions stretching late into the night; intelligent use of economic temptations and veiled threats. He is leaning, as a back up, on his European colleagues Tony Blair and Catherine Ashton.

Had Kerry been a little less optimistic, a little less certain of his ability to convince others, he would have sought alternate routes. He would say: One side, Israel, wants negotiations but is unwilling to pay the price of an agreement; the others side, the Palestinians, wants an agreement but is unwilling to pay the price of negotiations. There is no choice but to change the rules of the game. In the past we considered direct talks to be the most important thing. We viewed them as a sign that the Arab side was willing to recognize Israel. It brought the sides closer together and led to intimacy, even friendship. The Palestinians who were involved in the process preferred to confide in the Israelis rather than in their fellow Palestinians – and vice versa. An agreement wad not achieved. This is what Abbas understands after years of friendly contact with the Israelis: The negotiations only lead to more negotiations; they do not lead to an agreement. Kerry can leave the sides alone and let them deal with the situation they have created. This is what Clinton did. Alternately, he can declare that the US is reassessing its policy towards the Palestinian Authority and Israel. Perhaps the time has come for the Americans to present a draft agreement. Maybe it is time to reconsider the two-state solution. It is not wise to act like a sheep when you are in a fox's den. Behind every announcement on "real progress" there two sides that are breathing a sigh of relief. To give validity to his mission, Kerry needs the full support of President Obama. Obama came here to resign from the conflict. It is unlikely that he'll show a renewed interest in it.