Ashton, the EU's foreign policy chief, at the public start of their meeting in his office.

Responding to Netanyahu, Ashton said: "I hear what you say, especially on your concerns about what's happening with Hezbollah. And we will talk about these things."

A British proposal to put Hezbollah on the EU's terrorism blacklist was resisted on Wednesday by some of the bloc's 27 members who fear such action would fuel instability in the Middle East, diplomats said. 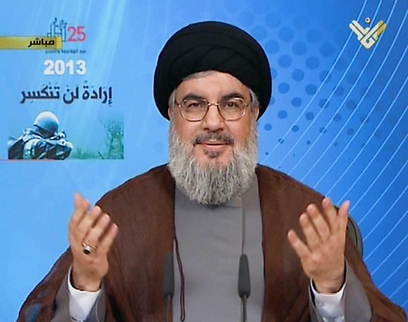 Britain has argued that the militant Shiite Muslim movement should face European sanctions because of evidence it was behind a bus bombing in Bulgaria that killed five Israelis and their driver in July. Hezbollah, which the United States lists as a terrorist organization, denies any involvement in the attack.

Diplomats said some EU governments had questioned whether there was solid evidence of Hezbollah involvement. Bulgaria's new government expressed similar doubts this month, but now says it will not

Israel and Hezbollah fought a war in Lebanon in 2006.

In arguing its case, Britain has also pointed to a four-year jail term a court in Cyprus imposed on a Hezbollah member accused of plotting to attack Israeli interests on the island.

Diplomats say a majority of EU member states, including France and Germany, back the British proposal. But unanimity is needed and Austria, the Czech Republic and Italy have voiced reservations over what would be a major policy shift for the EU.

Hamas , the Palestinian Islamist movement that rules the Gaza Strip, and Turkey's Kurdish militant group PKK are already on the EU blacklist, and their assets in Europe have been frozen.