Analysis: Chaotic Egypt in need of massive foreign assistance, not Obama's call for political dialogue; anything less is doomed for failure

The no-confidence vote of the Egyptian street in the Muslim Brotherhood regime does not bode well for the citizens. Israel and Egypt's other neighbors should be concerned because the Arab country is on its way to becoming a failed state.

Even if the current political crisis is resolved and the demonstrators return to their homes, the main ailments that led to the civil unrest will not disappear:

The economic distress in Egypt, particularly with regards to the employment of youngsters, is not new. This was actually the main reason behind the revolt against Mubarak's regime, but back then there was at least economic growth and a regular supply of basic goods such as flour and petrol. Today the Muslim Brotherhood regime is unable to provide these basic commodities.
Mass Protests
Leave Morsi alone
Amar Zachary
Op-ed: Egyptian researcher says opposition presenting distorted picture of reality under Islamist regime
Leave Morsi alone

What's really demoralizing is that there does not appear to be any politician or army leader who can rescue the Egyptian economy. In order to recuperate, Egypt is in need of massive foreign intervention, as well as generous investments from Gulf Arabs and Western corporations with the assistance of the International Monetary Fund and other global institutions, which would actually be running the corruption-ridden Egyptian economy until it recovers.

But the economic crisis in Europe and the one the US is beginning to recover from do not bode well for the Egyptian economy. Also, which foreign investor, or even tourist, would spend his money in a country where people are robbed on the street and women are constantly raped?

Internal security and the rule of law can be restored in Egypt, but this requires and efficient and determined regime, one that would have broad public legitimacy that would allow it to rule with an iron fist for a short period of time. Currently it appears that only the army is capable of this, but its leaders are hesitant after what happened to General Tantawi and his men, who tried to take over for Mubarak but were ousted following pressure from the Muslim Brotherhood and the street.

Since then, the generals are not keen on entering politics and are focusing on preventing a civil war and protecting Egypt's economic interests. They fear that if they try to act forcefully, the street will strike back and deprive them of the legitimacy they need after the street and the social networks have become a modern-day pharaoh that rules the land of the Nile. 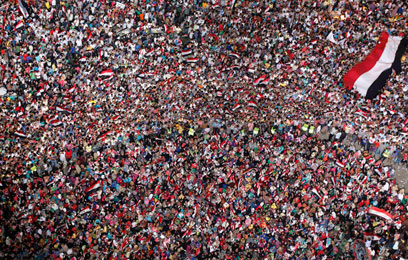 In light of the current situation, it is clear that Egypt has entered a trap which, as of now, it cannot escape. The economic distress and the threat of religious coercion are causing the youngsters to take to the streets, but if new elections are held that will depose Morsi and the Muslim Brotherhood, they may, after a short period of reorganization, return with renewed vigor and regain control over Egypt along with the Salafis and Jihadists. How? With mass protests and violence.

Unless Egypt's economy experiences a surprising turnaround, it will become a failed state, like Somalia and Afghanistan. Regional and global history has shown us that the violent nightmares in failed states also affect neighboring countries. Some countries, such as Iran, exploit the lack of governance in failed states to set up terror groups that operate on their behalf. This is what has happened in Yemen, for example.

Islamist terror groups thrive in areas where there is no governance. Drug-trafficking and piracy are also rampant in the absence of a central government.

The chaos is reducing the possibility – which still exists – that the Egyptian army will wage war against Israel. On the contrary, it increases the motivation among Egypt's military brass to preserve the peace treaty with Israel. But despite this advantage, the current situation presents a number of huge disadvantages, which will mostly likely grow more severe with time.

First of all, a situation in which the street dictates to the regime is very dangerous and turns Egypt into a fickle country whose responses are unpredictable. Today the masses in Tahrir Square are chanting slogans against Hamas, but tomorrow, will Israel act to curb the rocket fire emanating from Gaza, they may demand that the army enter Sinai to rescue the "Palestinian brothers." Egypt currently belongs to the Western camp, mainly because the US is the only country that provides it with military and financial assistance.

The heads of Egypt's army are loyal to Washington. But tomorrow the ayatollahs from Tehran may offer the desperate regime billions of dollars that would enable the regime to subsidize the price of Egyptian pita bread to the farmers. Then, even the generals and the Sunni clerics from Al-Azhar University would be faced with a difficult dilemma.

President Obama's call to resolve the crisis through political negotiation is indicative of his country's inability to help an important Middle Eastern ally. Two years ago, the same Obama rushed to force out the oppressive but functioning Mubarak regime.

Egypt is in need of massive financial and administrative assistance, similar to the assistance offered to Europe as part of the Marshall Plan following World War II. Anything less is doomed to failure, the effects of which Israel will most likely feel as well.