A senior US diplomat held talks Monday with Egypt's interim leaders as well as the head of the military in the highest level visit by an American official since the Egyptian army ousted the country's first democratically elected leader.

The two-day visit by US Deputy Secretary of State William Burns to Cairo comes nearly two weeks after Islamist President Mohamed Morsi was overthrown by the military following days of mass protests. Washington has been sharply criticized by both Morsi's supporters and opponents for what each side perceives as support for their rival's position.

There was no immediate word on the discussions with the interim civilian leaders. But the military said in a statement posted on the army spokesman's Facebook page that Burns and el-Sissi discussed "the recent political developments in Egypt ... and ways to reinforce cooperation" between the two countries. 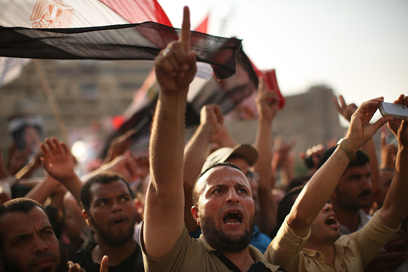 Burns, the No. 2 American diplomat, is also expected to meet with civil society groups and business leaders during his trip.

Ahead of the visit, the State Department said Burns would stress in his talks in Cairo US support for the Egyptian people and an inclusive democratic process in which all political groups can participate.

A Muslim Brotherhood official said the group does not currently have a meeting scheduled with Burns.

Meanwhile, Egypt's public prosecutor ordered the arrest of seven senior Muslim Brotherhood and Islamist figures on Monday over violence between Brotherhood supporters and opponents in the days before and after Morsi was deposed as president.

The list includes leading Brotherhood figures Essam El-Erian and Mohamed El-Beltagi, both of whom were attending a demonstration on Monday, according to the Brotherhood. They were also included in a similar list last week of people charged with inciting violence, but have not been arrested.

The latest charges accuse them of "inciting violence, funding violent acts, and thuggery."