The Egyptian army, with the support of groups opposed to the Muslim Brotherhood regime, deposed not only Morsi, but also a determined Islamist movement that is experienced in situations involving a siege and delegitimization and has millions of followers in Egypt. Therefore, it is not at all certain that President Morsi's ouster will bring Egypt the coveted political stability. What's even less certain is that the transitional regime will succeed in alleviating, even a little, the economic distress in the Arab country and increase the personal security of the citizens – regardless of their political and religious affiliation.

The jubilation of the Muslim Brotherhood's opponents is understandable, but this is just momentary ecstasy; the masses are drunk with power, but the hangover will be felt in the coming days.
Unrest in Egypt
Arab Spring still here
Yoram Meital
Op-ed: Egyptian society's show of force proves that forecasts of 'Islamic winter' were detached from reality
Arab Spring still here
In order to estimate how Morsi's ouster by the army will advance the economy, stability and security in Egypt - if at all - we must focus in the next few days on the following:

1) The response of the Salafis and the Muslim Brotherhood to the army's maneuver. Prior to General al-Sisi's speech, in which he effectively deposed Morsi, Brotherhood members, even senior ones, threatened to resort to violence to protect the president.

They have weapons, motivation and a sense of victimhood now that they have been removed from power. The question is whether they will physically oppose the measures announced by the army or accept the verdict. The resistance can be passive – such as staging strikes – but it can also be violent. Brotherhood leader Mohammed Badie, who has yet to respond to the dramatic developments, will dictate the movement's future. This is probably not the last we've heard of the Brotherhood, just as Hamas was not satisfied with its victory in the 2006 elections in the Palestinian Authority and carried out an armed coup in 2007 to seize control in Gaza. In this regard, it is important to see how the Egyptian army will be able to separate between Morsi's supporters and opponents. 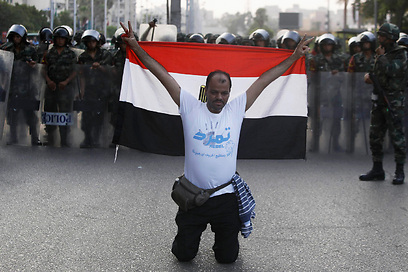 2) The period after Mubarak's ouster has taught us that the opposition groups know mainly what they do not want, but find it difficult to present a clear list of demands. They find it even more difficult to draft a list that is acceptable to those who will represent them in the interim government's institutions. This is another sign that the street is in power, and not only in Egypt.

Those who celebrated Morsi's ouster do not have an agreed upon leader to represent them. While many opposition organizations have authorized liberal leader Mohamed ElBaradei, the former head of the International Atomic Energy Agency, to represent them, the young people who initiated the second revolution in Egypt have yet to crown a leader of their own, and it remains to be seen whether they will have an influential role during the transition period. In short, we have to wait and see whether the army will succeed in establishing the complex transitional government announced by General al-Sisi.

3) Rewording the Egyptian constitution: One of the main reasons for the revolt was that the previous constitution was tailored to the needs of the Muslim Brotherhood and Sharia laws were defined as a source of authority. Now the opposition groups will apparently look to draft a constitution with fewer Islamic characteristics. The question is how the Muslim Brotherhood's loyalists will react. 4) We must see how the US and other countries react to the army's move. Should President Obama criticize the ouster of Morsi, it may encourage the Muslim Brotherhood to reverse the situation through political or violent means – or both simultaneously. The question is whether the US will deliver on its threat to stop providing assistance to Egypt in the event of a military coup. The Americans will most likely say that in overthrowing Morsi the army heeded the demands of the people; in doing so, Washington will be granting legitimacy to the interim government.

5) The response of the Arab countries, particularly that of the Gulf States which provide Egypt with the economic assistance that has helped it avoid the definition of a bankrupt country, is also important. If the Arab countries, particularly Qatar and Saudi Arabia, decide to continue funneling billions of dollars to Egypt, as they have done over the past year, it will be an important component in the stability of Egypt's economy, political life and personal security. It can be said that the Gulf leaders and their deep pockets will determine the fate of the second revolution in Egypt.

As far as Israel is concerned, it appears that Morsi's ouster will not have a direct effect on us, certainly not in the short term. It is clear that the army will have fewer resources and less time to dedicate to the goings on in Sinai and Gaza, but we should not expect a dramatic change in the relations between Israel and Egypt. The army, which is the de-facto ruler of Egypt, has an interest in preserving the peace treaty with Israel and preventing attacks on the Jewish state from Gaza and Sinai.