On the wrong foot

Op-ed: Washington is a great place to celebrate the signing of an agreement, but it is a cemetery for negotiations

Talks in Washington between Israelis and Palestinians have taken place before. Such talks took place 21 years ago, with Elyakim Rubinstein, who is now a Supreme Court Judge, as head of the Israeli team; and Haider al-Shafi from Gaza as the head of the Palestinian team. The negotiations ended in a resounding failure.

Ron Pundak, one of the architects of the Oslo agreement, recalls the failure in Washington in his latest book. He relates his meeting at the time with the late Faisal Husseini, one of Fatah's leaders in the West Bank, who asked to tell a story.
Renewed Negotiations
Peace talks boost security
Ron Ben-Yishai
Analysis: Bolstering of PA as a result of negotiations is crucial; terror groups have no reason to ruin the party – yet
Peace talks boost security
"There once was a poor Palestinian who wanted to sew himself a suit. He did not have enough cloth, and the tailor did not know how to do his job. The result was harsh: One sleeve was short and the other was long; the collar was crooked; the back was stretched on one side and loose on the other. What's the problem? The tailor said. Where the sleeve is short contract your shoulder, and where it's long push forward, bend your neck a little, walk on your side and everything will be fine. When the poor man got to the street people said: Look at that miserable fellow, what nature has done to him. He is crooked and distorted; he is hunched and he limps, but the tailor he found must be praised. Remarkably, he was able to design a suit according to the poor man's measurements." John Kerry is the new wonderful tailor. Over the weekend the entire world lauded his persistence, determination and persuasive abilities. He succeeded in what appeared to be an impossible mission. 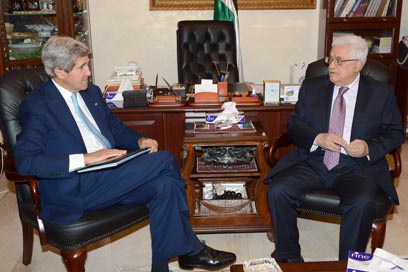 In diplomatic terms, there was definitely an achievement here. Kerry dealt with two leaders of little faith and managed to bring them to the negotiation table. Each gained something in the short term: Netanyahu got a respite from the international pressure on his government and a one-year delay of the Palestinian plan to turn the UN's institutions; Abbas received the release of 104 long-time prisoners, some of them murderers. This is a very charged, sensitive issue on the Palestinian street. He also got a guarantee regarding the freezing of settlement construction, American recognition (yet again) of the 1967 borders as the basis for an agreement and just as important – the continued transfer of financial aid that maintains his regime in Ramallah.

But negotiations are not the goal, they are just the means. The manner in which Kerry is dealing with the conflict will almost certainly lead to another failure and an ensuing crash. Three diplomatic agreements have been reached between Israel and its neighbors: The peace treaty with Egypt; the mutual recognition between Israel and the PLO; and the peace treaty with Jordan. The talks that led to the signing of these agreements were conducted behind the back of the American administrations. America was asked to join later as the financer, guarantor, mediator and host. Each time America initiated a move it failed. Examples of this are the talks between Israel and Syria and the US' efforts to promote negotiations between Israel and the Palestinians. Washington is a great place to celebrate the signing of an agreement; it is a cemetery for negotiations. The current starting point is particularly difficult. The gap between the goals of each of the sides is vast; the mutual suspicion is great and, unfortunately, justified. Currently no circumstances exist that can push either side to significantly change its positions and make painful concessions. The street on both sides does not expect it. Sometimes the very revelation that on the other side live people rather than monsters creates the enthusiasm and flexibility that pave the way to an agreement. But there is nothing emotional about a meeting between Attorney Yitzhak Molcho and Saeb Erekat. They've met dozens, maybe hundreds of times before. The friendly meetings have produced zero results. One is a spokesman; the other is a private lawyer. Neither of them have a mandate to make decisions. Tzipi Livni, whose whole political existence is based on these negotiations, is more ambitious than Erekat and Molcho, but she is also aware that the decisions will not be hers. An agreement will be reached only when the price of not reaching an agreement will be higher than the price of foot-dragging. Kerry believes he will be able to reach a peace agreement towards the establishment of a Palestinian state within nine months. Happy is he who believes.