My friend, my enemy

Op-ed: Nabil Shaath remembers Lipkin-Shahak, who told him: 'It's time to stop the killing'

Some of you are surely wondering why a Palestinian would eulogize an Israeli general. The answer is simple: Amnon Lipkin-Shahak was my partner in peace and remained committed to the cause until the day he died.

I met him at his home a month ago. He was weak and fragile and came out to meet my on crutches, but the smile I knew so well was still there. He said he was determined to survive until peace arrives.
Lipkin-Shahak Remembered
General turned peacemaker
Martin Indyk
Op-ed: Martin Indyk says deceased IDF Chief Lipkin-Shahak never gave up on the dream of peace
General turned peacemaker
My memory took me back to our first meeting in 1993, in Egypt. I arrived in Taba following the Israel-Palestinian summit in Cairo, which was headed by Rabin and Arafat. Arafat selected me to head the Palestinian delegation, while Rabin chose Lipkin-Shahak to head the Israeli one. We shook hands. He smiled and said: "Dr. Shaath, in my country you are more famous than I am, and you are better than me at writing and giving speeches. I would be glad if you could take a look at the speech I wrote for the opening of the negotiations." We launched our talks on the basis of this genuine modesty. We would walk along Taba's beach and were the subject of the famous photo: The general and the professor conducting peace negotiations. Upon my return to Cairo I was briefed on the general I had just met. I was told that he took part in Israeli raids that left some of my best friends dead. It was a major shock. We were enemies at times of war, but now it took on a very personal meaning. I decided to quit, but Arafat insisted that I stay on as chief negotiator. I told Amnon how I felt at our next meeting, and he responded: "I know it is difficult, but this is exactly why we are here. We've been killing each other for a very long time. It is time to stop. I am here to make sure that we will be able to live in peace in two countries alongside one another." We spent the next eight months with our teams in what was the first real attempt to implement the Oslo agreement. We got to know each other very well during this time, and it was clear to me that Amnon's commitment to peace was genuine. He was a third generation Sabra whose grandfather lived in Safed – where I was born. The negotiations were difficult and specific – sometimes they became too difficult – but we did not abandon the path. We did not give up. We were determined to reach an agreement within six months. 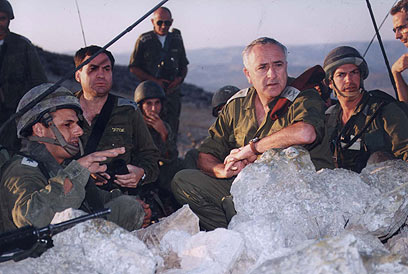 The agreement was signed after only a two-week delay. The last night was tough. Arafat, Rabin, President Mubarak and American Secretary of State Warren Christopher joined us. We negotiated until midnight; Amnon and I continued until the morning – until the signing of the agreement.

We worked together to implement a historic agreement that ushered in a new era of hope. Arafat and the Palestinian leadership returned to Gaza, and later to the West Bank. The Palestinian Authority was established, and the talks continued. Rabin's assassination was a devastating blow to the hope for peace, but together we tried to save the process, albeit without much success. Amnon left the army and then the government, but he remained loyal to his commitment to peace. He knew what was required in order for this complicated peace to succeed: A real two-state plan that guarantees Israel's security and at the same promises the Palestinians a free and independent state. Though we sat on opposite sides of the table, we always sought a formula that would bring victory to both sides. During our final meeting Amnon appeared tormented and concerned over the public's lack of hope and support for the peace process, but he was just as committed to seeking an agreement. We spoke for two hours, and I was encouraged by the strength of his spirit. I brought him a plant, and we both expressed hope that he would see it bloom. I will always remember Amnon as a peace partner, and just as I promised him in our last meeting, I will continue with my efforts to achieve peace. Nabil Shaath is a senior Palestinian Authority official