Body of woman found decapitated in southern Tel Aviv. Police: Body was found in horrible condition, obvious only psychopath could perpetrate something like this

The dismembered body of a woman in her 30s was found in a suitcase in southern Tel Aviv on Saturday. The body was decapitated.

Massive police forces arrived at the scene and have begun combing the area. One of the detectives told Ynet that: "This is a horrific event. The body was found in horrible condition and it is obvious that only a psychopath could perpetrate something like this."

An initial investigation revealed that a man traveling along southern Tel Aviv's Ha'Haganah Bridge spotted the suitcase, "I was traveling with my bike and the suitcase obstructed my path. So I tried to move it," Igor, the man, said. However, the case's unusal weight made him suspicious, prompting him to open it and find the dismembered body inside. 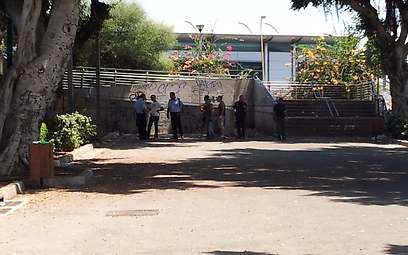 Police Chief Superintended Yossi Shperling said that "around 12:25 pm we received a call about a suspicious suitcase. District forces and sappers were alerted to the scene, and were surprised to find a body. We are only just beginning our investigation."

The police hope that the fact that the body was found inside a suitcase will aid them in finding the killer. A police source further noted that it is unclear how a man could carry the body-filled suitcase along the crowded street and leave it there without causing suspicion.

The body was found in a stairwell on the bridge which leads to a train station below street level. The area and bridge are a central crossing and they are frequented by large number of local residents and foreign workers.

One of the police's theories is that the killer dropped the case at the scene after noticing people walking by.

Shai, a paramedic who was alerted to the scene said: "After the woman was found lifeless we were called to the scene and saw body with serious signs of violence on it. We had nothing to do but declare her dead."