General Martin Dempsey, chairman of the joint chiefs of staff, will arrive in Israel on Sunday as the guest of IDF Chief of Staff Benny Gantz , Yedioth Ahronoth reported. He will meet with Prime Minister Benjamin Netanyahu and Defense Minister Moshe Ya'alon.

The parties will discuss the tightening of military cooperation in respect to the Syrian civil war including the issue of US reports attributing strikes in Syria to Israel's Air Force.

Dempsey will also address the issue of a possible Israeli strike in Iran in wake of recent statements on the subject made by Netanyahu in an interview with CBS. "Iran is inching "closer and closer to the bomb," Netanyahu said. "I won't wait until it's too late."

"We'll have to address this question of how to stop Iran, perhaps before the United States does," Netanyahu said referring to the difference in urgency for Washington and Jerusalem. 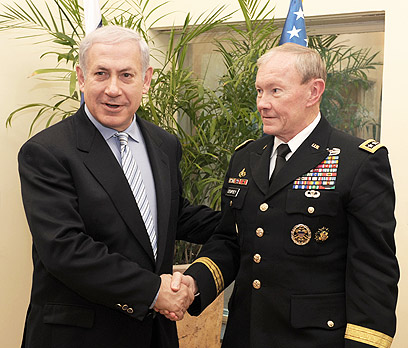 Addressing the cabinet last month, the prime minister said that "A month has passed since elections were held in Iran, and Iran continues to race toward the development of military nuclear capability."

Washington is worried about a possible Israel strike on Iran's nuclear facilities and tensions between the two nations are starting to build up.

Discussing the rationale behind releasing Palestinian prisoners as part of renewed negotiations with the Palestinians last week, Ya'alon alluded to the broader regional context. "There were many strategic considerations which might be revealed in the future," he said.

Dempsey made a previous trip to Israel last year amid calls to strike Iran. The Americans believe that decision makers in Israel are feeling over-confident after reported successful strikes in Syria.

It is also believed that Israeli officials are convinced that Iran's retaliation capabilities have diminished in light of Syria and Hezbollah weakened positions in the civil war.