Lebanese nationals on trial for plotting attacks on Western targets in African country say they were beaten, denied sleep by agents from Israeli intelligence agency

Two Lebanese nationals who are on trial in Nigeria for allegedly planning to carry out terror attacks against Israelis claimed they were manhandled by Mossad agents after their arrests.

During his testimony on Monday, one of the alleged Hezbollah operatives, Mustapha Fawaz said: "I was arrested in my residence at Wonderland Amusement Park, Abuja, on May 11, 2013, at about 1:30 am. By 8 am of same day, I was taken to the Department of State Service headquarters, where I was told that some Europeans want to interview me. During the 14 days, I was interrogated by six Israelis and one white-man with blue eyes.

"I was interrogated in Arabic language and they asked me series of questions on Hezbollah and Lebanon. They conducted (polygraph) test on me. They were rude and nasty; called me names and denied me sleep. I was handcuffed with my hands at the back. The Israelis beat me and tore my shoulder," Fawaz said.

He added, "They threatened to use electric on me if I didn’t answer their questions. After I passed the polygraph test, they left and said if I was sent to prison in Nigeria, that Nigerians have big private parts and will rape me." 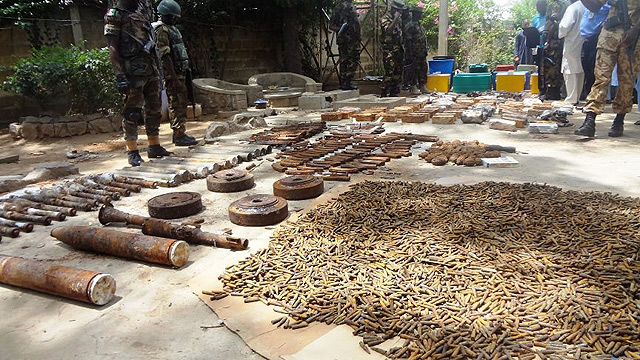 Fawaz said, "They asked me about my link with Hezbollah, but they concentrated more on Lebanon — whether I knew if there are weapons stored in the south of Lebanon or the identities of people who have been trained by Hezbollah."

Another accused, Abdallah Thahini, told the court that he equally had it rough with the Israelis as he was coerced and made to answer their questions under duress. "I was interrogated by the Israelis who were masked. No Nigerian was there. They put mask on me and asked me questions in Arabic. I knew that they were Israelis from their ascent. I was handcuffed and made to sit on a broken chair. They abused me and my leaders in Lebanon, they denied me sleep for five days and at a point, I collapsed," Thahini said. Fawaz, Thahini and Talal Ahmad Roda were arrested in May after a large amount of weapons, including anti-aircraft missiles and RPGs were found in a house in the northern city of Kano. A fourth suspect is said to be on the run. The three were charged with plotting to attack Western and Israeli targets in Nigeria, but they have denied the allegations.

Both Fawaz and Thahini denied any knowledge of the arms cache discovered in Kano.