The Hamas authorities in Gaza must halt several executions they say they plan to carry out after this week’s Muslim religious festival of Eid al-Fitr, Amnesty International has urged.

Hamas’ attorney general said last week that several convicted “criminals” are set to be executed in public as a “lesson” to others.

“This and other recent announcements by Hamas authorities that they will carry out further executions are deeply disturbing,” said Philip Luther, Director of the Middle East and North Africa Program at Amnesty International.

“We acknowledge the right and responsibility of governments to bring to justice those suspected of criminal offences, but the death penalty is cruel and inhuman, and there is no evidence that it deters crime more effectively than other punishments.” 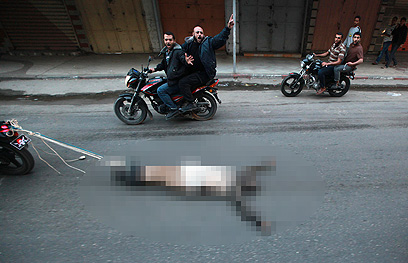 One of those at risk is a 27-year-old man known as “H.M.A.” who, while detained in relation to another case, was apparently tortured to “confess” to the rape and murder of a six-year-old boy allegedly committed when H.M.A. was under 18.

He was later sentenced to death in violation of both international standards and Palestinian law, which do not allow capital punishment for killings committed by people under 18. A 23-year-old prisoner known as “F.A.” is also said to have signed a “confession” under torture. He was sentenced to death on 24 March 2013 for “collaboration with an enemy entity” by the Central Military Court in Gaza City. According to his lawyer, he appeared in court weeping and with a bruised face. He told his lawyer that he had been hung by his wrists and ankles and beaten during interrogation. His appeal at the Military High Court is due to be heard on 14 August. If it is unsuccessful, he will be at risk of imminent execution. At least 40 prisoners are under sentence of death in Gaza, where torture and other ill-treatment against detainees in the custody of Hamas security agencies are widespread and systematic. The Ministry of Interior this week backed up the Attorney General’s threats to hold executions when a spokesperson confirmed the Minister’s readiness to carry out “public” executions to deter “offenders who seek to disrupt the security of society.” “Public executions are degrading and compound the cruelty of the death penalty,” said Philip Luther. “Hamas should pursue justice by prosecuting people accused of internationally recognizable crimes in fair trials without recourse to the death penalty and ensuring all allegations of torture are investigated. “We are urging Hamas to immediately halt all executions planned for after Eid al-Fitr, and to go further by establishing a moratorium on the use of the death penalty and commuting all death sentences.” The Hamas administration has governed Gaza since June 2007, carrying out at least 16 executions since April 2010. Eight of those executed had been convicted for murder and the other eight for “collaborating” with the Israeli authorities. H.M.A’s lawyer told Amnesty International that, soon after being accused of the unintentional homicide of a friend in 2009, he was beaten during interrogation and forced to “confess” to a second charge that he raped and killed a six-year-old boy in 2000. The Court of First Instance convicted him in May 2010 in both cases and sentenced him to two life sentences and another 14 years’ imprisonment for the alleged rape. Following an appeal by the prosecution, the Appeals Court upgraded the charges to murder in both cases and increased both life sentences to the death penalty. On 14 July this year, the Court of Cassation missed a final opportunity to protect H.M.A.’s rights when it upheld the death sentence in both cases. Former prisoner Na’el Jamal Qandil Doghmosh was executed on 17 July 2012, having apparently “confessed” to murder under torture. His family said that during interrogation in 2010 his nails were torn out and they saw burns and bruises on his body. Gaza’s last executions took place on 22 June 2013, when two men known as “A.M.Gh.” and “H.J.Kh.” were executed at the Jawazat police compound in Gaza, convicted of “collaborating with the enemy.” H.J.Kh. reportedly confessed after being tortured.