Mujahideen Shura Council in the Environs of Jerusalem, a jihad organization operating in Gaza and Sinai, claimed responsibility Tuesday for the rocket attack on 1 am Tuesday.

A statement released by the group read that the rocket was launched to avenge the killing of four militant of extremist Salafi group Ansar Bayt Al-Maqdis on Friday, claiming the attack was carried out by "a Jewish unmanned aircraft".

"Eilat and other Jewish towns will not be enjoying security, tourism or economy. Jews will pay for the blood of the jihad fighters," the message stated. 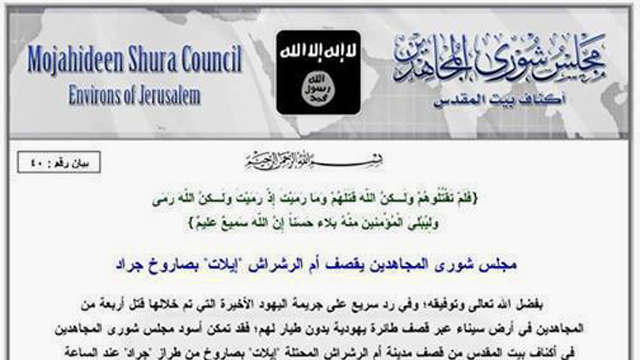 "Terror possessed the hearts of the felonious Jews who rushed to underground shelters," the message stressed, adding that "senior officials started releasing contradicting statements regarding the number of rockets that hit the town. We ask Allah to raise fear in their hearts. Sinai, its men and its tribes are undefeatable and the Zionist vanity will not manage to humiliate them."

Egyptian newspaper al-Youm al-Sabaa reported Tuesday that Sinai security forces began searching for the location from which a rocket was launched towards Israel.

According to an Egyptian security source, preliminary information revealed that the rocket was launched from an area in the vicinity of the border.

Earlier Tuesday it was reported by Palestinian sources that Ansar Bayt Al-Maqdis, which operates in the Sinai Peninsula, claimed responsibility for the rocket attack, which was intercepted by Iron Dome.

Four members of the Ansar Bayt Al-Maqdis were killed on Friday near Egyptian Rafah in an airstrike attributed to the IDF by foreign media.

At approximately 1 am Tuesday, the Iron Dome system deployed in Eilat intercepted a rocket aimed at a residential area in the region. Magen David Adom reported two persons were treated for anxiety attacks.

A retired Israeli security official said it was the first time Israel's Iron Dome interceptor system had struck a missile fired at Eilat.

Eilat's mayor said there had been no panic: "I think the military prepared in the best possible way with an enhanced defensive shield to protect Eilat and tourists including the (Iron Dome) battery... I and my citizens feel secure," Meir Yitzhak-Halevy told Army Radio.

Violence in Sinai picked up after former Egyptian president Hosni Mubarak, an ally of Israel, was toppled in 2011. It has increased again since last month's military overthrow of Mubarak's successor, Islamist president Mohamed Morsi.