Egyptian security forces killed at least 500 people and injured more than 900 others on Wednesday when they cleared a camp of Cairo protesters who were demanding the reinstatement of deposed President Mohamed Morsi, his Muslim Brotherhood movement said.

There was no official confirmation of the deaths at Rabaa al-Adawiya, in northeast Cairo, where thousands of Morsi supporters awoke to police helicopters circling over the site.

An Egyptian Health Ministry spokesman said only eight protesters were killed and 80 more were injured in the morning's crackdown in Cairo.

A second camp near Cairo University was swiftly cleared in the early morning.

Gunfire rang out as protesters ran away from Rabaa, and clouds of black smoke rose above the sites. Armoured vehicles moved in alongside bulldozers which began clearing away tents, and one witness said he saw 15 bodies at a field hospital.

"It is nasty inside, they are destroying our tents. We can't breath inside and many people are in hospital," Murad Ahmed said at the edge of the sprawling camp, where Muslim Brotherhood guards had positioned sandbags in anticipation of a police raid. 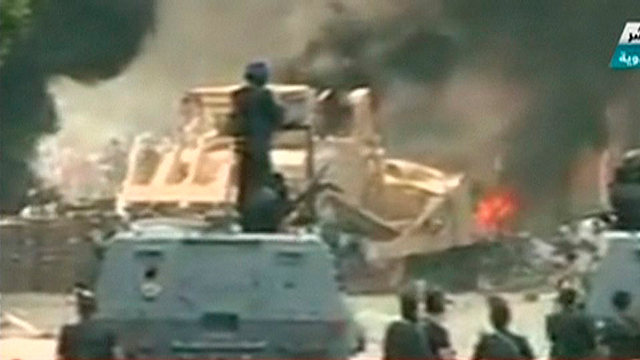 Two members of the Egyptian security forces were shot dead as they tried to disperse protesters, the state news agency reported.

The operation, which began at around 7 am, came after international efforts failed to mediate an end to a six-week political standoff between Morsi's supporters and the army-backed government which took power after his ouster on July 3.

With the Brotherhood calling on supporters to take to the streets, the violence risked further destabilizing the most populous Arab nation and endangering hopes for democracy.

The breakup of the camps would strip the Brotherhood of its main leverage against the government. Some of the group's leaders have been arrested or are wanted and their assets frozen in one of the toughest crackdowns it has ever faced.

"Tear gas was falling from the sky like rain. There are no ambulances inside. They closed every entrance," said protester Khaled Ahmed, 20, a university student wearing a hard hat with tears streaming down his face.

"There are women and children in there. God help them. This is a siege, a military attack on a civilian protest camp."

A Reuters correspondent saw dozens of people lying in the street with bullet and birdshot wounds. Pools of blood were everywhere. 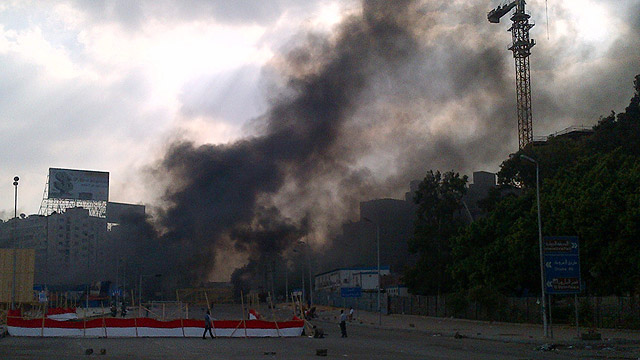 "At 7 am they came. Helicopters from the top and bulldozers from below. They smashed through our walls. Police and soldiers, they fired tear gas at children," said teacher Saleh Abdulaziz, 39, clutching a bleeding wound on his head.

"They continued to fire at protesters even when we begged them to stop."

Protesters ripped branches off trees to try to put out fires that spread through tents. Others smashed the pavement, grabbed chunks of cement and hurled them at police.

Egypt has been convulsed by political and economic turmoil since the 2011 uprising that ended 30 years of autocratic rule by US-backed President Hosni Mubarak, and the country is now more polarized than any time for many years.

There is deepening alarm in the West over the course taken by Egypt, which receives around $1.3 billion in military aid from the United States each year. 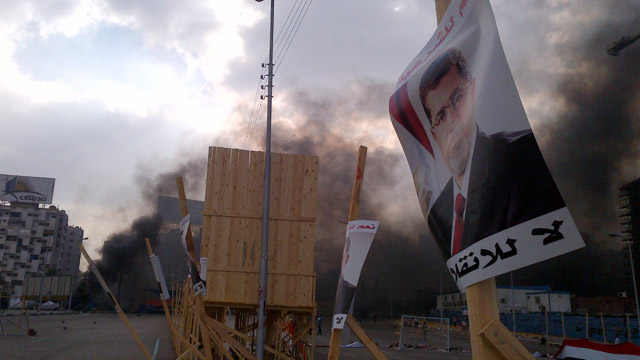 It also has a peace treaty with close US ally Israel and controls the Suez Canal, a vital waterway for global trade.

More than 300 people have already died in political violence since the army overthrew Morsi on July 3, including dozens of his supporters killed by security forces in two separate earlier incidents.