Analysis: Cutting off aid to Egypt would mean hurting close ally that allows US free movement of ships and planes, but many in Congress against helping army that turns its guns on civilians

WASHINGTON – US President Barack Obama's vacation ends on Sunday, and the riots in Egypt, which followed him all the way to the golf course in Martha's Vineyard, will continue to follow him in the coming week as he tries to promote domestic issues on the American public's agenda.

Obama is doing what the American public is asking him to do – advance the economic issue. According to recent polls, an overwhelming majority of Americans are against any US involvement in Egypt, just as they oppose involvement in Syria.
US Government
Obama lost touch with Mideast
Yossi Shain
Analysis: Regional violence, chaos result of America's shortsightedness, lack of leadership
Obama lost touch with Mideast
Obama cannot publicly declare that he wants the Egyptian army, which has been an ally of Washington for decades, to defeat the Muslim Brotherhood, a movement which produced quite a few terrorists, including current al-Qaeda leader Ayman al-Zawahri. Therefore, he is refusing to call the ouster of Islmist President Morsi a "military coup" – as it should be – and stresses that while Morsi was elected democratically, he ran Egypt according to the interests of the Muslim Brotherhood, rather than according to the interests of the general public. Addressing the issue publicly for the first time on Thursday, Obama did try to play down the long-standing friendship between Washington and the Egyptian army, which is based on US interests: An open Suez Canal; open airspace for American logistical flights; preservation of the peace with Israel and the war on terror in Sinai and Gaza. The New York Times reported that unlike other countries, including close allies of the US which require up to a week's notice to allow American warplanes to cross their airspace, Egypt offers the US "near- automatic approval" to resupply the war in Afghanistan through its territory or to carry out operations in the Middle East, Southwest Asia or the Horn of Africa. US officials are now worried that falling out of favor with Egyptian generals would constrain US military operations in the region and significantly increase their flight times, the newspaper said. The New York Times said in times of crisis, US warships are also allowed to cut to the front of the line through the Suez Canal, even at rush hours, when it is swarming with oil tankers. 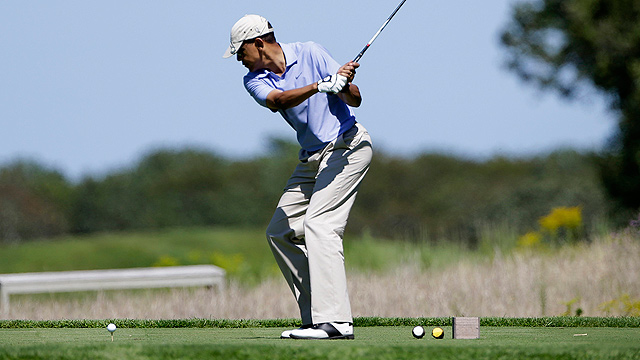 Since it signed a peace treaty with Israel in 1979, Egypt has been the second largest recipient of US aid – after Israel. Washington gives $1.55 billion in assistance to Egypt every year. Roughly $1.3 billion of this aid is used by Egypt to purchase US-made tanks and planes. Therefore, American companies may suffer if the aid to Egypt is stopped. Lockheed Martin, for example, has a contract to supply Egypt with 20 F-16 fighter jets for a sum of $776 million. Fourteen of these planes have already been supplied to Cairo. Cutting off aid to Egypt may also lead to layoffs in Ohio, where employees of General Dynamics assemble parts used to upgrade Egyptian tanks. Other, smaller companies may also lose Egypt's business if the transfer of aid is stopped.

However, Obama cannot ignore the images of civilians being butchered on the streets of Cairo and Alexandria, which are broadcast to every corner of the world. The "world's police officer" cannot remain silent when the Egyptian army turns its guns on civilians. This is why Obama is responding hesitantly, in order not to risk the relations with the Egyptian army, a true friend to the US.

It is in America's interest to promote a national compromise in Egypt that will end to the violent protests staged by the Muslim Brotherhood and bring about a return to civilian rule in the North African country. Towards this end, Deputy Secretary of State William Burns was sent to Cairo to promote a swift transfer of power to civilian hands through new parliamentary and presidential elections, although it is clear to all the army will remain the real boss behind the scenes. 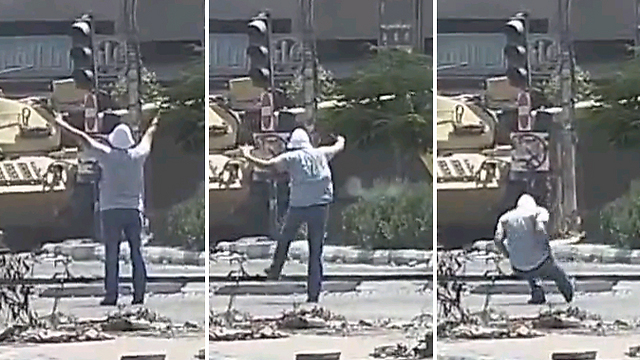 Killing of unarmed protester in Cairo

But Burns returned to Washington empty handed, as did senators John McCain and Lindsey Graham, who visited Egypt as Obama's envoys to try and explain to the army that the US will be forced to cut off aid should the bloodshed continue. But the senators found out that Defense Minister al-Sisi and his people are completely disregarding the American position. US ambassador to Egypt Anne Patterson, a very experienced diplomat, is at her wit's end. The important talks are being held between Defense Secretary Hagel and al-Sisi. Hagel is trying to soften the Egyptian defense minister by explaining to him that Obama understands the danger the Muslim Brotherhood poses to Egypt.

But Obama has domestic issues to consider. Republicans McCain and Graham returned from Cairo frustrated and support freezing aid to Egypt. Republican Senator Rand Paul, who is opposed to the transfer of any American aid to foreign countries and backs a complete American withdrawal from the entire Middle East, demands that the US stop supplying weapons to an army that kills civilians. Liberal Democrats such as Patrick Leahy are also calling to stop the transfer of aid to Egypt. On the other hand, numerous senators and members Congress who have Israel's interests in mind are keeping mum on the issue. They apparently support what former US Ambassador to the UN John Bolton is saying publicly – that assistance should be given to allies of Israel and the US. One such ally is the Egyptian army.

It is hard to imagine that Obama will cut off aid to Egypt. The military coup in Pakistan during the Bush administration did not stop the transfer of American aid. This is not what the Egyptian army is concerned about as it is fighting for its survival. The aid allows the Americans to talk to the Egyptian generals, and Washington must keep in mind that Russia is waiting right around the corner, to fill any void that may be created. This is why Obama is operating slowly. Following Morsi's ouster, the Pentagon froze the transfer of four out of six F-16s it was supposed to supply to Egypt. Both sides can withstand this. Obama also announced the cancellation of a joint military drill in Sinai. Egypt can withstand this as well, mainly due to the fact that its soldiers are busy suppressing the riots in Egypt's cities and fighting terrorists in Sinai. America may soon declare that it is freezing the transfer of Apache helicopters in order to buy a little more time. The Washington Post reported that the Obama administration is debating whether to stop next month's scheduled delivery of new Apache AH-64D aircraft to Egypt.