As Egypt drifts towards civil war and anarchy, and moves further away from democracy and a stable government, President Obama and other senior administration officials remain uncertain as to what Washington's role in the Middle East is.

The American failure in the Middle East is continuous and dangerous. The Obama administration is repeatedly displaying a lack of understanding, shortsightedness and general lack of leadership with regards to the dramatic changes in the region. Obama condemned the Bush administration for its mistaken perception of America's ability to shape the Middle East and fight terror, but today it appears that his government is making the same mistakes and is even adding some of its own.
Egypt Violence
Street battles in Cairo, and the Israeli connection
Ron Ben-Yishai
Collapse of talks, tensions accompanying conclusion of Ramadan, fear of growing support for Muslim Brotherhood are what prompted Egyptian army to act to dismantle Nahda, Rabaah al-Adawiya mass sit-ins
Street battles in Cairo, and the Israeli connection
In his first term, Obama focused on the withdrawal from Iraq and Afghanistan and in introducing a new atmosphere in the Middle East, in the spirit of his speech in Cairo. In this regard, the US also found itself in a trust crisis with Jerusalem and the freezing of peace talks between Israel and the Palestinians. Today, the Obama administration is completely 'bankrupt' in the face of the fall of regimes and the collapse of the states themselves. The US government has lost all touch with the harsh reality in Syria. It seems that Washington has no influence on the chaotic events in the Arab country. The government made the mistake of not affirming its steadfast opposition to Assad and his alliance with Nasrallah; to Russia; and to the invasion of jihadi forces. It also failed to set clear red lines for the spread of violence. Washington failed to clearly identify an alternative opposition, and now it cannot provide any solution to the unremitting chaos in Syria. Its rhetoric regarding civil rights, crimes against humanity and the use of chemical weapons has also been hollow. 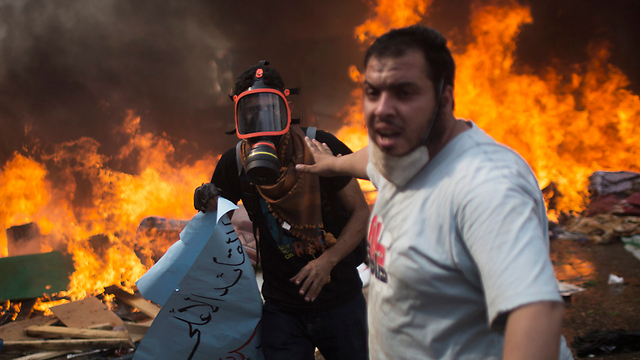 In Egypt, an important and expensive ally of the US, the failure is even more resounding. Egypt is at the edge of an abyss, and numerous officials in Cairo are pointing to the lack of US leadership as the reason for the collapse. Obama, who during his Cairo speech promised a new and democratic era, initially lost his ally Mubarak in an amateurish fashion. Later he also lost the democratic forces on the street and even the Muslims who rose to power in democratic elections made possible by the first Tahrir revolution.

During the 2013 revolution, Washington also lost the Egyptian army, the secular proponents of democracy and, of course, the Muslim Brotherhood members who cooperated with the administration. The administration is failing to act in time, is responding poorly and at times appears to be fanning the flames instead of introducing real solutions.

The Obama administration, which has excelled in leading from behind (in Libya, for example) is not leading at all. There is a reason why it is focusing on the Israeli-Palestinian peace process as a possible bright side that may boost its status in the region. This situation is sensitive, dangerous and even explosive. The US administration's urgent need to bring about an agreement between Israel and the Palestinians makes Washington less patient and less sensitive to nuances. This may create unnecessary pressure which may also project on Washington's ability and motivation to act vis-à-vis the Iranian issue.

The need to maneuver when all the clocks are ticking at the same time may have a negative effect on Washington's ability to get its priorities straight. The Obama administration adopts a certain concept and then continues to support it despite the changing reality.

Obama is perceived as being unreliable and indecisive. The current situation in the Middle East calls for deep and clear thinking, and mainly cautious statements. Washington is not identifying any clear ideological patterns or pragmatic courses of action in the region. These are huge challenges for a superpower that is seeing its status in the Middle East decreasing. When the empire is embarrassed, the shards of the failures fly in all directions.