Turkey's prime minister said Israel was behind the ouster of Egypt's Islamist President Mohamed Morsi, and that Turkey has evidence to prove it.

According to Turkish newspaper Today's Zaman, Recep Tayyip Erdogan told members of his party during a meeting in Ankara on Tuesday: "Israel is behind the coup in Egypt, we have evidence."

The Turkish prime minister cited a conversation he had with a "French Jewish intellectual" who predicted that the Muslim Brotherhood would not be permitted to rule even if it won an election "because democracy is not the ballot box." 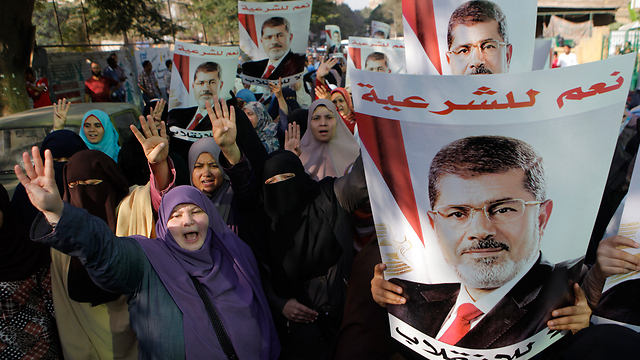 Turkish daily Hurriyet quoted Erdogan as saying "Now the West starts to say democracy is not the ballot box or not only the box but we know that the ballot box is the people's will."

The prime minister criticized the Western countries' stance vis-à-vis Egypt’s "coup," the paper reported, saying "The West should (understand) the description of democracy, they need to learn it.” "This is what has been implemented in Egypt. Who is behind this? Israel," the prime minister said and then cited the meeting between an intellectual and the justice minister in France before the 2011 elections. "Nobody can say the word 'dictator' where dictatorship exists. They hang (such people) as they do in Egypt," Erdogan said. "Those who want to see a dictator must look at Egypt." Erdogan, a fierce critic of Israel, has been a strong backer of Morsi as an example of a democratically elected Islamic leader. He is also one of the biggest critics of a coup that ousted Morsi from power. Turkey and Egypt recalled their ambassadors last week as relations worsened.

Venezuela's president recently accused Israel and the United States of conspiring to oust Morsi and of stirring unrest in Syria, the AFP news agency reported.

In response to the Egypt crisis, Caracas recalled its ambassador from Cairo to protest the military-backed government’s crackdown on Morsi’s Islamist supporters and the Muslim Brotherhood.

"We have witnessed a blood bath in Egypt," President Nicolas Maduro was quoted as saying. "We warned that the coup against Morsi was unconstitutional. Morsi was kidnapped and the responsible party for what is occurring in Egypt is the (American) empire, which has its hands in it."

"The United States doesn't have friends, it has interests, and what it wants is to control the planet," Maduro added.