The Palestinians might turn to UN bodies in response to Israeli settlement building even before their negotiations with Israel have run their course, a Palestinian spokeswoman said Wednesday, reflecting growing frustration over recent Israeli plans to promote more than 3,000 new settlement homes.

If the US is unable to halt Israeli construction on war-won lands, deemed illegal by most of the international community, the Palestinians may have to seek redress elsewhere, said Hanan Ashrawi, a senior official in the Palestine Liberation Organization.

"We are saying very clearly that if Israel does not stop, then we have to move," Ashrawi said during a tour of Israeli settlements in east Jerusalem where hundreds of new apartments are planned.

Ashrawi said she was expressing the official Palestinian position, though it was not clear if her warning was a sign of frustration or actual intent. Palestinian President Mahmoud Abbas might be reluctant to disrupt recently relaunched negotiations with such a step, for fear of incurring US anger. 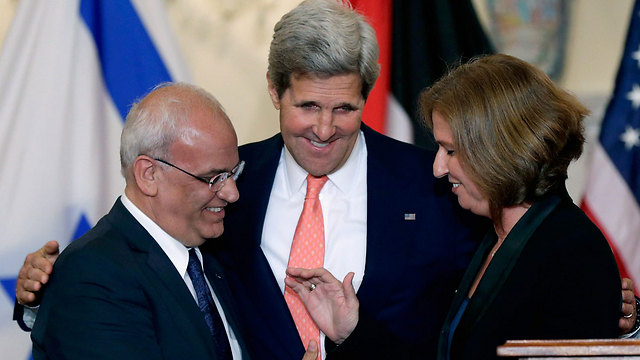 An official in Israeli Prime Minister Benjamin Netanyahu's office said the Palestinians had promised to suspend their UN campaign during the negotiations, which are envisioned to last up to nine months. If they break that promise, they would violate one of the commitments that helped restart talks after a five-year freeze, said the official, who spoke on condition of anonymity in line with briefing regulations.

Ashrawi acknowledged that US Secretary of State John Kerry had asked the Palestinians not to join UN agencies or turn to the International Criminal Court during the negotiations. The Palestinians have threatened to pursue war crimes charges over Israeli settlement building in the court if peace efforts fail.

Ashrawi said Abbas linked the suspension of the UN campaign to Israel's promise to release 104 long-held Palestinian prisoners, not to the talks. So far, Israel has freed 26 prisoners and the rest are expected to be freed in three more stages in coming months.

Abbas had resumed talks with Israel only reluctantly, under US pressure. He had sought an Israeli settlement freeze or Netanyahu's recognition of Israel's 1967 frontier as a starting point for border talks. The Palestinians want a state in the war-won lands, where Israel has built dozens of settlements that are now home to more than half a million Israelis.

In the end, Netanyahu agreed to neither demand, and Abbas was left with the promised prisoner releases and Kerry's assurance that the US considers the 1967 frontier as the baseline.

Palestinian officials have said Abbas was given US assurances that Israeli settlement building would be reined in. However, since the start of talks Israel made several announcements on promoting plans for close to 3,100 settlement apartments, including hundreds in east Jerusalem, the Palestinians' hoped-for capital.

Ashrawi on Wednesday took reporters on a tour of Jerusalem's southern edge where Israel has built thousands of settlement apartments. Israel's construction plans in the area threaten to cut off the city from the southern West Bank and render a contiguous Palestinian state impossible, she said.

Israel is "deliberately destroying the chances of success for these talks" by accelerating settlement activity, Ashrawi added.

Israel has defended the recent construction announcements by saying it is only building in areas it expects to keep in any future peace deal.