Moderate-leaning president posts Shana Tova to 'all Jews, especially Iranian Jews' on Tweeter, together with photo of man praying. 'He believes in equal rights,' says expert

“As the sun is about to set here in Tehran, I wish all Jews, especially Iranian Jews, a blessed Rosh Hashana,” Rohani tweeted. The message was posted with a picture of a man in a yarmulke bowing his head in prayer, MSNBC reported.

It’s a far cry from former President Mahmoud Ahmadinejad, whose term preceded Rohani’s — and who once inflamed the Jewish community and world by calling the Holocaust a lie. 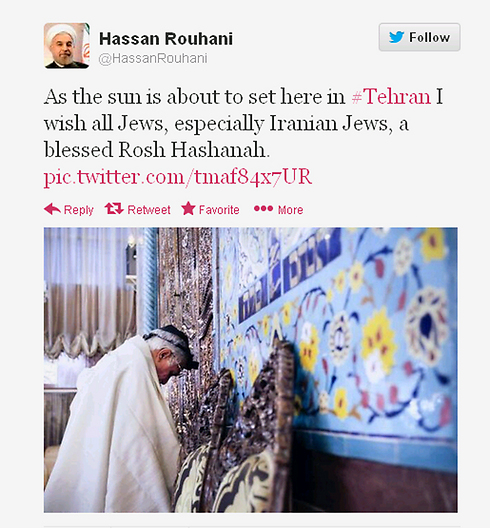 The Iranian government has denied that the blessing came from the Iranian president, claiming that Rohani does not have a Twitter account and that the messages was posted by his political supporters.

According to The Independent, Christine Pelosi, daughter of Nancy Pelosi, the minority leader in the US House of Representatives, responded to Zarif’s greeting with a reminder of Iran's alleged Holocaust denial, but Zarif replied: "Iran never denied (the Holocaust). The man who was perceived to be denying it is now gone,” referring to Ahmadinejad’s notorious Holocaust denial. According to a report, Iran’s Jewish population, estimated in a 2011 census to number fewer than 9,000 people, comprises only a tiny fraction of Iran’s population – though the State Department and religious leaders estimate that number could be upwards of 20,000. The Muslim majority account for an overwhelming 99.4%.

With Islam as the foundation of Iranian law, Persian Jews and other religious minorities, including nearly all non-Shiia religious groups, have faced years of discrimination. While Jews, Christians, and Zoroastrians are granted freedom of religion “within the limits” of the Constitution, many have faced harassment and imprisonment at the government’s hands, MSNBC reported. Additionally, under Iranian law, religious minorities cannot be elected to senior government or military posts with the exception of five reserved seats in the 290-member legislative body.

“President Rohani has made clear from the beginning of his campaign that he believes in equal rights for all minorities, and that would of course include the Jewish minority,” Iranian-American author and NBC News contributor Hooman Majd told MSNBC.com. “I think it’s in keeping with his character, his personality, and the way he wants his administration to be seen by the Iranians who voted him in.”