Israeli volunteers provide refugees with food, medication and equipment, The Economist reports; it's their duty as Jews, they explain

About a month and a half after fighting in Syria began, Anat (alias) decided it was time to act. She rallied her organization, an Israeli group that specializes in aid in countries with which Israel does not maintain diplomatic relations, and left. She's been away for almost three years.

"We're here to be a voice for the voiceless and give some perspective to the world," she said. "Israel is a country that was started by a nation almost gone extinct in the Holocaust, and this aid is our way of saying, 'Never again'. We can't be silent even when there are other people involved."

The organization has operated in Iraq, Indonesia, Pakistan and many other countries. "It's important for us to break the stereotyping," she said, "We're not part of an unhinged left. We're made up of leftists and rightists alike, Jews and Muslims, Israelis that share this activity, and a big part of the organization is made up of IDF elite unit graduates with a solid security perception. Our common denominator is that we are positive of Israel's absolute superiority over its neighbors, and from within that security we can help the children of even our worst enemies. We could as easily one day, if we must, look at our enemy through the crosshairs of a gun."

According to recent reports in The Economist, Anat, and dozens of other Israelis unrelated to her, operate inside Syria to aid refugees. "Our aid comes in several aspects," Anat said. "There is equipment for the refugee camps; there are mass feeding factories that provide dry food—we've just recently handed out 300,000 meals—when we can, we give them cameras to document their lives, medication, and other life-saving and life-aiding means. We never give away weapons, though they sometimes ask in a roundabout way. Once one of their leaders hinted that they need weapons and I clarified that our organization provides only humanitarian aid and nothing else." 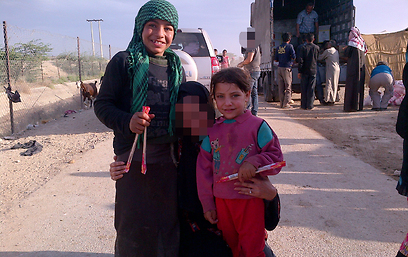 Some of the Syrians don't even know they are being aided by Israelis; others do, and are pleased with this fact. "The leadership knows, and they're the ones who guide us where to go to help the most. Some people were shocked when they heard we were Israelis at first, and other people said that they knew if there was anyone who would help them, it'd be the Jews; they just wondered what took us so long."

The organization also has local Syrian volunteers, one of whom has died in an air raid. "It's terrifying," Anat said, "we all have lives and families at home. But it's even more terrifying to drown in the swamp of indifference that has taken over the world."