The Air Force set up an Iron dome missile defense battery in the Jerusalem area on Sunday, as the United States lobbied for domestic and international support for military strikes against Syria. The decision was made after situation assessments by the IDF.

A military spokeswoman would not comment on the deployment, saying only that "defense systems are deployed in accordance with situation assessments."

Late last month a battery of the mobile system was set up in the greater Tel Aviv area, pointing northwards towards Syria. The battery was removed from the area a week later after the IDF lowered its alert level due to the White House's decision to seek the authorization of Congress before ordering a strike on Syria.

Israeli media have reported that six or seven such batteries are currently in use. 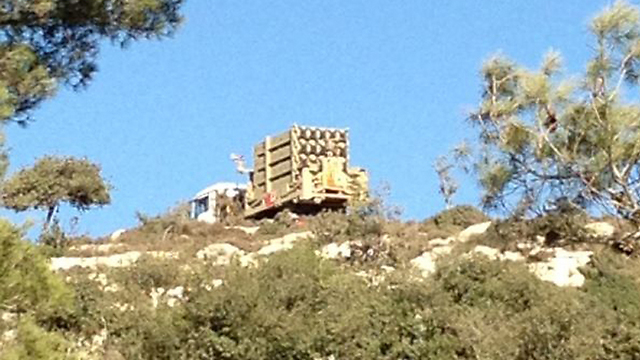 Speaking at a cabinet meeting on Sunday, Prime Minister Benjamin Netanyahu called Israel "an island of tranquility, quiet and security" amidst "the storm raging around us", without explicitly mentioning Syria or its ally Iran.

In previous weeks Netanyahu has repeatedly said Israel was not involved in the war in Syria, but would "respond with force" if anyone attacked it. There are fears that if the United States and its allies attack Syria, forces of Syrian President Bashar Assad or its Lebanese Hezbollah proxies could retaliate against neighboring Israel, Washington's key ally in the region. Late last month, Iran's army chief of staff General Hassan Firouzabadi warned: "Any military action against Syria will drive the Zionists to the edge of fire." US President Barack Obama's administration is seeking to shore up support both at home and abroad for limited military strikes against Syria in retaliation for what it says is the regime's use of chemical weapons in a Damascus suburb. In Washington, Congress is due to begin full debate this week on whether to approve Obama's plans when it returns from its summer break on Monday.