IDF offcer who struck activist: My trial is unjust

Lt. Col. Shalom Eisner who was documented striking Danish activist addresses his plea deal in email to friends: 'The question is, what is the message to commanders who are at the frontline'

A few days after reaching a plea bargain with a military court after being filmed hitting a foreign peace activist from Denmark with his M-16 rifle, Lt. Col. Shalom Eisner sent his officer friends an email for the Jewish New Year. In the email, he said, "I have no doubt that this flawed trial is giving me a lot of points in doomsday court." Under the plea bargain, Eisner will serve two months of community service without pay. He will not be discharged from the IDF, but will not be promoted to a new position and will retire from the army early.

In a New Year greeting sent by mail to a group of his friends, the IDF officer said that he's "trying to continue with love and faith, serve truth and justice with the love of Israel, and it's a search, what we are, and what our spiritual strength is."

Eisner, who serves as head of the armored branch at the Zeelim army base, said the plea deal was hard for him to accept. "Even if I was wrong and the rally could be broken with less violence," he said of the pro-Palestinian bike ride where he struck the Dane, "Then I've been punished severely." 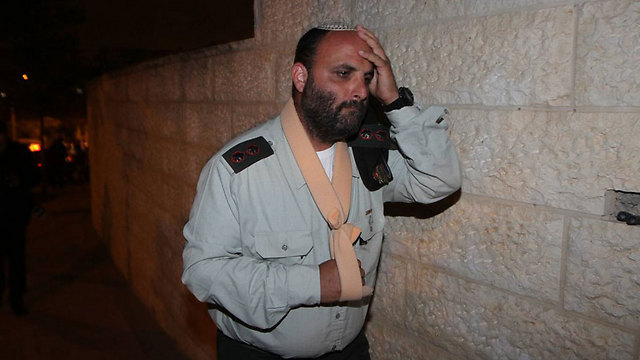 Lt. Col. Eisner (Archive photo: Gil Yohanan)
The officer said that "a senior officer told me that's how they punished all IDF commanders. The question is, what is the message to commanders who are at the frontline, doing the dirty work and not hiding behind screens, in the middle of the heat to be in front of protesters who swear and spit at you. I broke my hand in that incident. Those protesters were endangering my life." Eisner said he takes responsibility for what happened, adding "I had no hatred for those activists." Explaining his New Year message, he said, "These legal proceedings are immoral and unjust. I've already been judged for my actions."

Sources close to the officer stressed that according to senior IDF officers Eisner has been disciplined enough and his trial will cause damage and restrictions for commanders in the field. They said the decision to accept the plea deal came from Eisner not wanting to drag himself and his family through an exhausting trial. Sources also said that in his position at Zeelim, he has support not only from senior officers but from reservists.