Putin's desperate attempt to save Assad

Analysis: Proposal to disarm Syria of WMDs promising, but may also present great danger if not implemented immediately

Russia's compromise offer to disarm the Assad regime of its chemical weapons presents a great opportunity, but it is also very dangerous. Therefore, the initial response of the White House, which sees the proposal as a Russian trick aimed at buying time and further delaying an American strike, is justified. A general proposal that does not include specific details on the supervision of the chemical weapons' disarmament does not warrant a serious response.

Only when Russian President Putin and Syria's Assad present a specific agreement will the West be able to determine if it's a ploy or if there is a basis for an agreement that will satisfy all sides involved. By the way, it was US Secretary of State John Kerry who first proposed on Monday to dismantle and destroy Syria's chemical weapons arsenals. But Kerry gave Assad a week to do it.
Mideast Tensions
Disarm Israel of nuclear weapons
Yuval Eylon
Op-ed: Israel says nuclear-free Mideast will be possible only when peace is established, but continues occupation
Disarm Israel of nuclear weapons
Seemingly, forcing Syria to surrender its control of the chemical arsenals to the international community is the optimal solution to the crisis. It will prevent Assad from using weapons of mass destruction in the future and will deter other players in the Middle East, such as Iran, who will realize that the international community will not settle for anything less than the dissolution of unconventional military capabilities. But in order for this to happen, a number of conditions must be met: 1. Syria will put its chemical weapons arsenals under the supervision of inspectors appointed by the UN Security Council. Russian inspectors may be included in this group, but Europe and Asia must also be represented. 2. Syria will agree to surprise inspections and searches at the chemical weapons storage sites. 3. Syria will place under international control its chemical weapons manufacturing facilities, as well as its chemical precursors and stockpiles of chemical warheads. 4. Syria will agree to the destruction of its chemical weapons and chemical manufacturing facilities. This strategy was employed by the UN inspectors who were sent to disarm Iraq of WMDs following the First Gulf War. However, we must keep in mind that Saddam Hussein's people tried to dupe the UN inspectors on several occasions and they needed to be reminded with Tomahawk missiles (in 1993 and 1995) that the Americans will never tolerate such ploys.

Reaching such an agreement within a week or two will be considered a great achievement for President Obama. The determined threat of an American strike on Syria not only deterred the dictator from Damascus, it also forced Putin to find a solution that will prevent the Syrian regime from using WMDs in the future. This will send a clear signal to Iran regarding the resolution of the nuclear crisis. 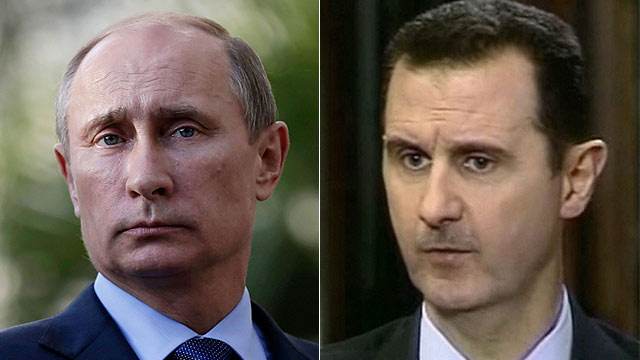 If, however, Syria will be given time to hide a certain amount of its chemical weapons and the Russians will not agree to pop inspections by international monitors based on intelligence information obtained from Middle Eastern or European countries (or from the US itself), and if Syria will not be forced to destroy its chemical weapons, then the agreement will not be worth anything and will only allow the butcher from Damascus to continue with his deceptions.

It should also be noted that in order to attack Israel, Syria would not need a large amount of chemical weapons. Assad would not need all of the 1,000 tons of chemical agents currently in his possession, but only a fraction of this amount. In addition, should the negotiations on an agreement drag on, Syria will be able to transfer at least part of its chemical weapons arsenal to Hezbollah in Lebanon. Such a development would of course be of great concern to Israel. As far as the Jewish state is concerned, this is the worst possible scenario - just as bad as having the WMDs fall into the hands of the jihadists who are taking part in the Syrian civil war. The conclusion is that the negotiations must begin immediately and end within a few days with the Security Council approving a detailed proposal that will see Syria's chemical weapons placed under international control and then destroyed, preferably in a neutral country. Should the Russians try to drag out the talks, it would mean that their intentions are not serious. In this case, the US should view the proposal as nothing more than a ploy meant to buy Assad more time. Putin's proposal may be serious and aimed at avoiding his humiliation by an American strike in Syria despite his warnings and veto at the Security Council. This turn of events presents a great opportunity for President Obama, but there is also the risk that the US will be deceived. The entire world, including Israel and Iran, is waiting anxiously to see how things play out.