US President asks Congress to delay vote on military strike in Syria to allow Moscow time to convince Washington of credibility of formulated settlement in which Assad will transfer chemical weapons to international control, eradication

US President Barack Obama on Tuesday asked Congress to delay votes on authorizing military strikes against Syria in order to give Russia time to get Syria to surrender any chemical weapons it possesses, according to US senators.

"What he (Obama) wants is to check out the seriousness of the Syrian and the Russian willingness to get rid of those chemical weapons in Syria. He wants time to check it out," Senate Armed Services Committee Chairman Carl Levin told reporters.

Levin made his remarks after a lunch meeting on Capitol Hill that Obama attended. On Monday, the Senate began debating a resolution backing US military strikes against Syria, which was requested by Obama on Aug. 31.

Secretary of State John Kerry said Syria must do more than just declare its chemical weapons stockpiles and sign the international treaty that bans them if it wants a Russian-led effort to avert US military strikes to work. 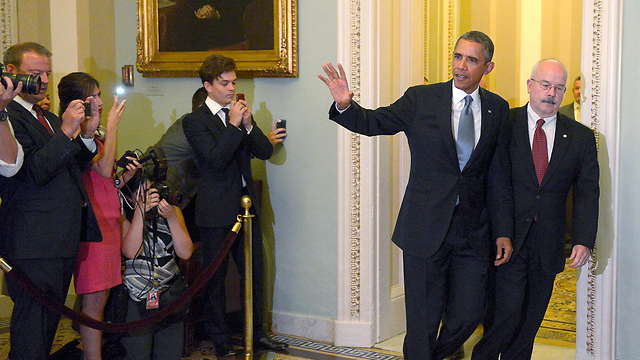 Just minutes after Syrian President Bashar Assad's regime announced Tuesday that it would take those steps, Kerry said he hoped that it would "go further" in the interests of peace. He said the Syrian government must "live up to what they said just said they would do" and then cooperate with Russia "to work out a formula by which those weapons could be transferred to international control and destroyed."

He further added that the regime should also enter a genuine dialogue with the Syrian opposition in order to end the civil war.

As Obama and Kerry are looking into possible compromise on the Syrian crisis, US Ambassador to Israel Dan Shapiro addressed the crisis at an Institute for National Security Studies conference in Tel Aviv, saying: "It is important that we as the international community ensure that the norm against the use of chemical weapons is maintained."

Shapiro said if an end to the crisis could be achieved "without a military strike, that, of course, would be anyone’s preference.”

The ambassador nonetheless added that though the US' interest was to solve the issue diplomatically, "there is no time to take the pressure off without putting a particular time frame on it. We will not permit any diplomatic initiatives to stalling tactics,” he stressed.

Meanwhile, the UN Security Council has canceled a meeting on a resolution aimed at securing and destroying Syria's chemical weapons stockpiles. Council diplomats said Russia asked for the meeting and then withdrew its request. There were no other details.

Kerry said the United States is expecting to receive ideas about how to secure Syria's chemical weapons from Russian Foreign Minister Sergei Lavrov on Tuesday. "He is sending those to us. They'll be coming informally in the course of the day. We'll have an opportunity to review them," Kerry said in a Google+ hangout interview. Kerry had spoken to Lavrov earlier on Tuesday.

Washington believes the Russian proposal must be endorsed by the UN Security Council "in order to have the confidence that this has the force it ought to have," said Kerry, adding that the Russians did not share that view.