Netanyahu: Message to Syria will be received 'loudly' in Iran

Israeli Prime Minister Benjamin Netanyahu said on Wednesday Syria must be stripped of its chemical weapons and that the international community must make sure those who used weapons of mass destruction pay a price.

Netanyahu said Syria had carried out a "crime against humanity" by killing innocent civilians with chemical weapons and that Syria's ally Iran, who is at odds with the West over its nuclear program, was watching to see how the world will react.

"It must be ensured that the Syrian regime is stripped of its chemical weapons, and the world must make sure that whoever uses weapons of mass destruction pays a price for it," Netanyahu said at a naval officers' graduation ceremony. "The message that is received in Syria will be received loudly in Iran." 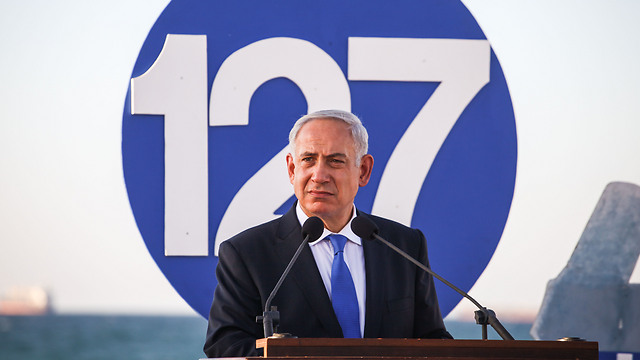 The remarks came after Syria accepted a Russian proposal that it give up its chemical stockpiles in the face of possible US military action.

Israel views the civil war in neighbouring Syria almost entirely through the prism of Iran, which it believes is trying to develop an atomic bomb. Iran denies it wants nuclear weapons and says its nuclear programme is for civilian purposes.

President Shimon Peres addressed the Russian proposal to disarm Syria of its chemicals weapons as a means of avoiding an American strike against the regime of President Bashar Assad. "The leaders of the US and Russia are working to find a credible way to achieve this goal without war," he told the ceremony.

"Assad cannot be trusted to honor the agreement,” Peres said, but expressed optimism that Washington and Moscow could impose conditions on the Syrian president that would force him to give up his chemical weapons.

“I know both President Obama and President Putin and I am convinced that if an agreement is reached it will be reliable, explicit and significant. The agreement must ensure that Assad has no chemical weapons,” he said.

The president said Assad knows he would pay a "lethal price" for any attack on Israel.

Defense Minister Moshe Ya'alon said during the ceremony that Israel was "monitoring the events with responsibility, level-headedness and the awareness that we must trust ourselves – our strength and our deterrence capability.

"We live in a reality in which instability is the only stable thing in the stormy waters of the Middle East," he said.

Meanwhile, Russia has given the United States its plan for placing Syria's chemical weapons arsenal under international control and intends to discuss it on Thursday in Geneva, the Interfax news agency cited a Russian source as saying on Wednesday.

US Secretary of State John Kerry, who is to meet Russian Foreign Minister Sergei Lavrov in Geneva, said on Tuesday that Lavrov was expected to send him Russia's proposals for review by the Obama administration.