Israelis, Palestinians learn to 'think big' during meetings with American officials in charge of policy aimed at promoting business entrepreneurship among women

The curious glances followed us when people saw us together: In the hotel dining room, elevator, shops, museums and more. There were also those who expressed their amazement at this unusual combination of women who look like they’re each from somewhere else, some of them with head coverings, and whose conversation was characterized by a mix of languages. Those who dared to ask were even more surprised to discover that half of the group came from Israel and the other half from the Palestinian territories.

This delegation was the product of the comprehensive cooperation between several organizations encouraging women’s groups to meet together: The US State Department, the Bureau of Educational and Cultural Affairs, the Office of the International Visitors, Graduate School USA and the English Language Office.

The initiative was to invite women from Israel and the Palestinian territories to participate in a program for international leadership and to promote economic leadership and business entrepreneurship among women. The program participants met with officials from various organizations involved in promoting entrepreneurship and empowerment of women and learned their practices: Government, academic, business, community, financial and professional. A secondary goal was to create partnerships and ongoing collaboration between the participants and their American counterparts. "Expect a life-changing experience," said the program manager in the opening session of the program. At that moment I was skeptical, but three weeks later I thought and felt differently.

The program started in Washington DC, at a meeting with a policy maker who taught us about the structure of government and its positive approach to developing and encouraging business entrepreneurship. "Business entrepreneurship policy helps us create more and more jobs." All of the representatives we met later at the SBA and Labor Office agreed. "We see the development of business capabilities as integration in the labor market for more people and as contributing to increase the capacity of production, trade and service," added a Congresswoman we met. "Policy that encourages entrepreneurship has added value in innovation, promoting export capacity and inspiring development," summarized the representative of the Bureau of Economic and Business Affairs. 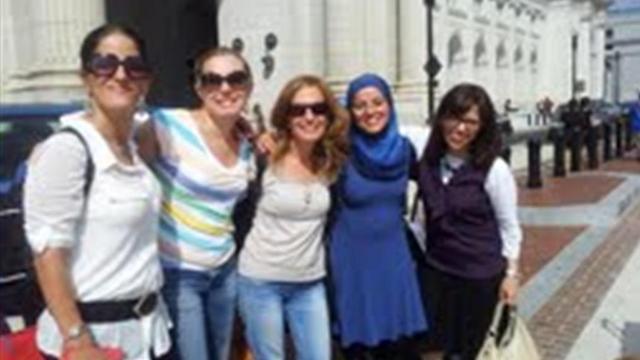 Lunch time was an opportunity to visit the Smithsonian Institute. The enormous and impressive museum was busy with thousands of families who came to visit its many exhibitions in nature, science, space, art and history. Free entrance for visitors has encouraged many families to choose Washington DC as a summer holiday destination and to enjoy the museum.

In the evenings we roamed the landscaped streets surrounding the White House, Capitol Hill, government agencies, various embassies and the local cafes. These walks helped us share what we experienced during the day.

The secret is to think big and make it, said executives we met in corporations such as Ernst & Young and JP Morgan, who run special programs dedicated to promote entrepreneurship and success among American women. "We are working with many governments trying to recruit more women, to improve their status and influence the economy in their country through empowerment and accumulation of knowledge and skills," a UN official told us.

"Think big" was on my mind every day when we got to New York and I ran in Central Park or shopped around Times Square. "Thing big" was also on my mind the night I saw "Phantom of the Opera." When I arrived at the Statue of Liberty, I started to realize that thinking big is more than just words. A New York taxi driver told me that day that "you can live in New York the way you live in Africa and you can live in Africa the way you live in New York. It is a lifestyle choice. All you have to do is think big…" That day I also discovered that two women who participate in our program went to the Holocaust museum together, one of them an Orthodox Jew and the other an Arab Israeli. Think even bigger.

"I received some ideas here how to improve the forum I established for the women from my community in Jerusalem", said an Orthodox small business owner who participated in the program, after we met the small business women owners from Burning River Coffee Community. For me, Cleveland was a kind of home itself. The city faces a lot of problems similar to Beersheba and the Negev region. One of the most important meetings for me was there, with the "Entrepreneurship and Innovation Institute," which tries to help Cleveland increase its number of citizens by addressing employment and entrepreneurship issues.

One of their programs is very similar to the one I run at Ben-Gurion University in partnership with the Bengis Center for Entrepreneurship and Hi-Tech Management. At the same meeting, I asked leaders there for permission to forward their details to relevant officials in Beersheba and the Negev in order to initiate cooperation and shared learning. The officials were interested and welcomed my offer.

The same willingness to cooperate was well received when we visited the Amish community. This community is considered closed, but it is known for establishing many successful businesses. The good feeling and open mind to new ideas continued during the following days in Cleveland. In every tour, I saw efforts to create an attractive impression of the city in spite of the large number of industrial buildings. One of the methods was to establish unique fountains and botanical gardens. Another effort was the development of mass tourist attractions (such as the Museum of Rock and Roll).

We were all very excited when we left Coretta Scott King Young Women's Leadership Academy, especially the Palestinian women and Katerina Rudenko who works for the Israeli Manufacturers' Association. "We teach our girls that they can achieve all they want through the five Rs: Receive, respect, resourceful, receptive and rewarding. That’s all they need, and we allow them to get it. It began with Dr. King's dream and we just help to fulfill it," the school principal told us. "I want to copy this model. Can you help me?" asked one of the Palestine small business owners, and got a positive reply.

That day we met with another women’s forum. "It feels great to understand that we are working with similar methods and can learn from each other," said Keren Peled, who works for MATI (Israeli NGO which is funded mostly by the Agency for Small and Medium Business).

We arrived in Los Angeles a little tired and tense from the events going on in the Middle East. It was strange to hear about the US preparing to attack in Syria while we were in the States. Without a doubt, being on the Santa Monica Beach and walking along Hollywood helped distract us. But what was more significant was meeting with the 29-year-old businesswoman who developed a unique business idea and raised $4 million for its implementation. Today, she is the manager of Big Frame Company and employs 15 women.

"I work very hard for the right to tell myself every day that I am a woman entrepreneur," she told us, and asked us if we do the same. Later that day, and during the program summary, it occurred to me that this was a powerful question to ponder and that we learned so much from each other and from our American colleagues. Shopping together, visiting museums, walking in nature and all the other activities we shared enabled us to talk about the program and take advantage of the opportunity to know and see things differently. It was life changing.