For the third time over the past few weeks, IDF forces encountered early Tuesday morning armed and organized resistance during a nighttime operation to arrest terror suspects, this time in Jenin. Until recently, the Palestinian resistance to the arrests was spontaneous and unarmed.

In an interview with Ynet, GOC Central Command Maj.-Gen. Nitzan Alon warned that more and more areas in refugee camps in Jenin, Qalandiya and near Nablus were becoming havens for Palestinian terrorists. "They want to limit our operational freedom," Nitzan said of the armed Tanzim members and Islamic Jihad gunmen, who challenge the Palestinian Authority's rule and are responsible for the latest clashes with Israeli forces.

According to the IDF Central Command chief, the Tanzim and Islamic Jihad gunmen behind the attacks on Israeli soldiers are residents of refugee camps who have declared they do not accept the authority of the regime in Ramallah or the "one law, one weapon" principle which Palestinian President Mahmoud Abbas's security forces are trying to enforce.

The gunmen claim they are being denied jobs and benefits which the PA offers to cronies and are therefore challenging the regime and its security arrangements with Israel.

This phenomenon is potentially explosive as far as Israel is concerned, as the entry of IDF forces into the refugee camps may ignite a broader confrontation on the ground. Alon is aware of this danger, but stresses that his forces' main goal is to foil terror-related activity in the refugee camps. 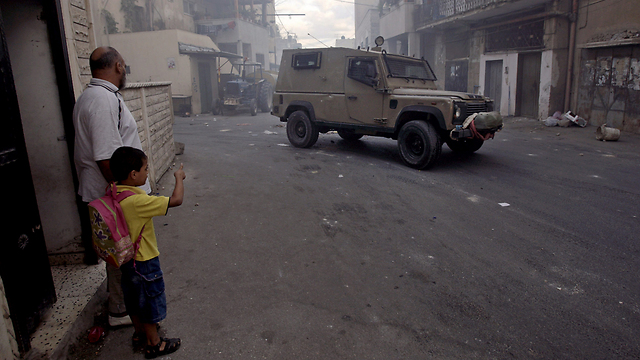 "The principle according to which we reach terrorists everywhere is crucial," he told Ynet. "They want to limit our operational freedom, and we want to prevent this. we cannot allow a situation whereby the Palestinian terrorists have safe places where they can get organized and use as bases from which they leave to carry out terror attacks."

According to Maj.-Gen. Alon, "this is already happening to some extent and this phenomenon must not be allowed to continue. I do not believe our entry into the camps in order to arrest will ignite the entire territory." 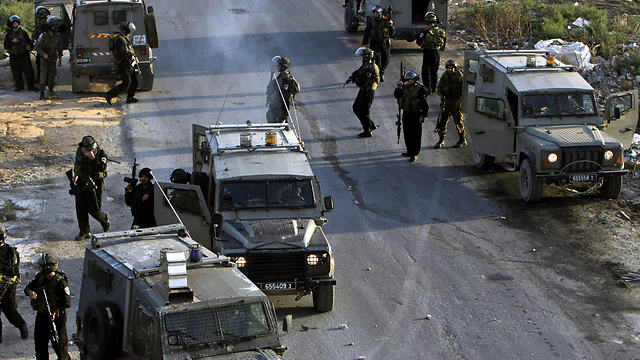 Addressing Palestinian complaints that many of the casualties in these clashes are not related to the arrests, Alon said: "We will make an effort to operate in a way that will reduce the number of casualties among the Palestinians, and of course among our forces. The fight against terror is important because it prevents a broad flare-up; it does not cause it."

During the early morning clashes at a refugee camp near Jenin, Palestinians hurled stones, Molotov cocktails and makeshift grenades at IDF soldiers. The troops responded with crowd dispersal means and live fire.

The IDF said the wanted terrorist who tried to escape was identified as 19-year-old Hussam Sayeed al-Tubasi, an Islamic Jihad member and arms dealer who also threw explosive devices at IDF forces on a number of occasions. He was shot and later died of his wounds. The Palestinians said another man was injured from IDF fire in the incident. 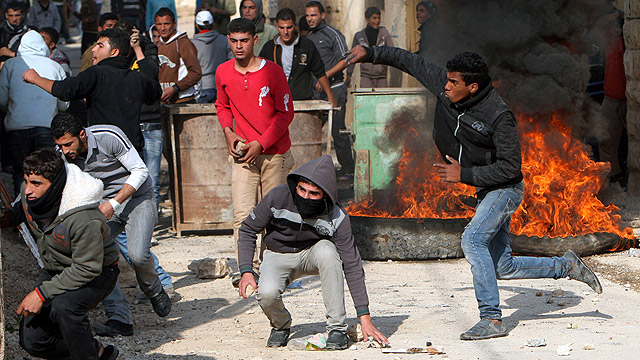 Since Alon's appointment as GOC Central Command in March 2012, only one Jew was murdered in the West Bank, and the number of terror attacks in the region is the lowest in a decade. But despite the sense of security, extremist settlers repeatedly mention past statements by Alon which they interpret as being understanding of the motives behind the Palestinian terror. They consider the general to be an extreme leftist because his wife, according to them, is a member of Machsom Watch.

Alon has been criticized as of late over his policy for dealing with Palestinian riots and "popular terror" in the West Bank without causing fatalities, which he claims could ignite the entire area and lead to a third intifada.

Extremist settlers disagree, and they have referred to the riots, which escalated after Operation Pillar of Defense in Gaza, as the "Nitzan Alon intifada." Meanwhile, the wave of violence in the territories has been quelled. 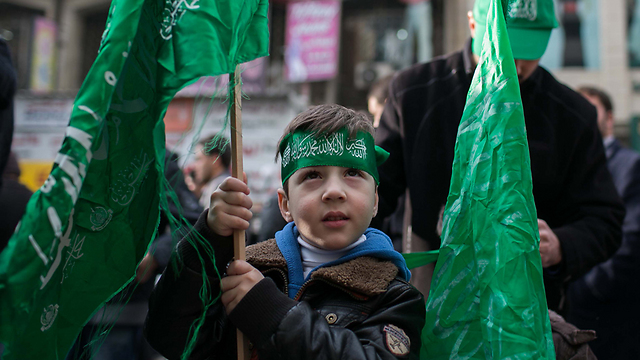 "The situation in the territories is stable," Alon told Ynet, "But beneath the surface there are always elements that undermine stability. We are aware of the dangerous potential of those who oppose the diplomatic process and are trying to thwart it with terror, as was the case in 2010. Therefore, we are working with intensity to foil the terror of Hamas and others.

"The current situation is relatively good, but this is the result of nightly arrests," he said.

Alon praised the Palestinian security forces, saying they are also contributing to stability. "Their ability to (foil terror attacks) is greatly influenced by their legitimacy on the Palestinian street. If they will be views as collaborators with Israel – then they have no legitimacy. If they are seen as serving the Palestinian interest – they have legitimacy. We are detecting a little more activity on their part. It stems from ability and motivation to act against Hamas," he said.

According to the IDF Central Command chief, the current situation of Hamas and other terror organizations is dire. The Palestinians see what is happening in Syria, Egypt and Iraq and do not want to find themselves in a similar situation. This is why there is not a lot of demand for resistance ideologies which call for active confrontation.

"A struggle exists in Palestinian society between radical Islam and seculars, and the security cooperation (between Israel and the PA) must be viewed in this context. In Gaza Hamas rose to power before the shake-up and the Palestinians in Judea and Samaria know The IDF's presence there is preventing a similar outcome," Alon said.

The Palestinians are demanding that Israel withdraw from the entire Jordan Valley and not have any military presence along the Jordan River. Can we count on international police forces to take over for the IDF and prevent the infiltration of terrorists and weapons from Jordan?

"No. We cannot count on a foreign force to do the work along the border with Jordan."

General Alon claims the improved economic situation has also contributed to the relative calm in the West Bank. "Since President (Barack) Obama's visit in March funds have been flowing to the Palestinian Authority. Donations have increased, and we recently released to the PA tax funds that had been accumulating. The effect was immediate: The PA regularly pays salaries, and the improvement in the economic situation has a restraining effect on the ground," Alon said. "Any assistance that will be given to the PA to establish a viable economy that is not dependent on donations – this will have a long-term effect. But this is the job of the political establishment."

The general said the recent easing of Israeli restrictions on the flow of people and goods into and out of the West Bank has also had a calming effect on the Palestinian population. Alon mentioned the entry of a million Palestinian tourists into Israel during Ramadan and Eid al-Fitr and the travel of Arab Israelis by the masses to the West Bank to trade and enjoy themselves. "This contact between Israeli society and Palestinian society has a positive influence and its calms the area," he said.

Has the recent release of Palestinian prisoners also helped calm the situation?

"Some of the prisoners return to their old ways, while others indirectly encourage the armed struggle. The recent release of prisoners contributed to the strengthening of the Palestinian Authority's status, which is being credited with the achievement.

Alon said one of the reasons the Arab Spring has not reached the West Bank has to do with the fact that the PA, as opposed to other Arab regimes, is attuned to the needs of its public.

When there is talk of stability and instability in the West Bank, the issue of Jewish terrorism, euphemistically dubbed "price tags", cannot be ignored, as well as the dangers of escalation they entail.

General Alon corrected me: "If there's a Jewish girl who comes down to the road after the evacuation of a settlement and hurls a stone at a passing vehicle it isn't terrorism, but if they're torching a mosque it is terror that may lead to escalation and create vengeful attacks. We had several events like that last year, but statistically, this trend stopped; partially due to improved preparedness and partially because the citizens in Judea and Samaria know and understand this is dangerous activity. But there are still problems in certain locations, such as Yitzhar.

Hamas, according to General Alon, is in distress. They withdrew the financial, logistic and military support from Iran and Syria, and now the Egyptian revolt has taken away the support of the Muslim Brotherhood and the advantages they hoped to gain from them. Moreover, the new administration in Egypt considers them a risk and is vigorously acting against them.

"It created new distress for the Hamas government in Gaza, and financially and operationally weakened Hamas in Judea and Samaria," Alon said, while noting that this fact has positive implications from Israel's perspective. But not only Israel: "Abbas seizes opportunities and is doing all that he can to realize these opportunities."

Alon is cautious not to say so explicitly, but he can be understood as saying that Abbas is seizing Hamas' weakness in order to try, even partially, to bring back the PA's rule to the Gaza strip. He is also taking advantage of the political stump Hamas is caught in and wants to hold general elections in the West Bank and Gaza soon.

The PA president also talks of reconciling with Hamas, but is not willing to compromise and demands the issue will be done on his terms only. Meanwhile, Hamas is not compromising, and so reconciliation still seems quite far.

General Alon speaks of the relations with the neighbors across the border, in Jordan, with understandable tremendous caution. The coordination with the Hashemite Kingdom's security sources is a precious asset to the security establishment and should in no way be jeopardized. But the general's statement can be understood as optimistic.

The Israeli fears that came about when the turmoil in the Arab world began seem to become more moderate. The Islamist groups within Jordan are becoming weaker recently due to the weakening of Egypt's Muslim Brotherhood and the half a million Syrian refugees who stormed into Jordan and are risking its stability. 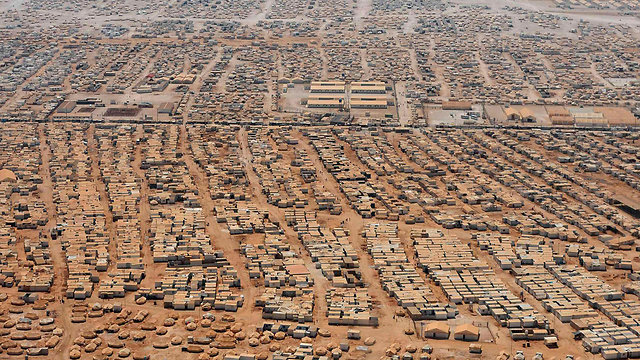 "I look with great estimation at the manner in which the Jordanian authorities and royal family operate and succeed in exhausting their abilities," Alon said. "They analyze the regional arena very well. The Jordanian security system and the IDF have many common interests that we try to realize."

I ask him about the new path that drug and weapon smugglers from Sinai have found. After the border with Egypt has been sealed shut, they now transfer their merchandise to Jordan, and from there on through the desert or through boats or swimmers in the Dead Sea.

"There is no dramatic increase of smuggling attempts in this way, but we have increased intelligence and operational activity in order to thwart this phenomenon. The Jordanians too have an interest in that this does not occur."

The Central Command chief was nine years old when the Yom Kippur War broke out. Does he, after 40 years, have personal and relevant conclusions from that difficult national experience?

"There are two key things that I apply as direct lessons," he said, "the first – humility. The enemy must never be underestimated. I see that with the Palestinians, for example, precisely because of their inferiority in the technological field, they discover true talent in the use of alternative tools at their disposal. The other lesson is to understand that the worst case scenarios may actually happen. Even if the likely scenario is optimistic – as in the latest Syrian crisis – I must prepare my troops for emergency."