Analysis: Iran can afford to make concessions to West now that it is so close to achieving nuclear capability

Iran's supreme leader surprised the world and the Iranian public on Tuesday when he declared that he was interested in diplomatic talks on the Islamic Republic's nuclear program. "Heroic flexibility is very useful and necessary sometimes," said Khamenei, who until then hadn’t given any indication that he was on board with President Rohani's moderate line. His statement is a clear signal that Iran intends to present a new position in the negotiations with the five permanent members of the UN Security Council and Germany (P5+1) and perhaps even conduct direct negotiations with Washington.

It appears that this about-face is genuine. Israel believes there are two main reasons behind this change: While Iran has technically not crossed the red line set by Prime Minister Benjamin Netanyahu at the UN General Assembly a year ago, it has surpassed it with elegance and sophistication. Instead of accumulating 250 kilograms of uranium enriched to 20% purity (Netanyahu's line), the Iranians have increased the pace of the installation of centrifuges which are used to enrich uranium to any purity level – including highly-enriched natural uranium containing +90% U-235 (the fissile isotope of uranium), which is used to make nuclear weapons. Iran currently has some 17,000 centrifuges, of which 10,000 are already operational. A few thousand of the centrifuges are of an advanced model that enriches uranium at three or four times the pace of the older ones. But when Iran will activate all the systems it has installed in the Natanz and Fordo facilities – probably at the end of the year – it will no longer have to play hide and seek with Netanyahu over the amount of uranium enriched to 20% purity. The moment Khamenei and his advisors decide, the nuclear experts will simply be able to activate all the centrifuges and within about eight weeks they will have enough weapons-grade material to build the first nuclear bomb; Iran will then be able to build another five or six nuclear warheads.
Obama and Iran
A president's word
Baruch Leshem
Op-ed: Obama knows if he fails to keep his promise on Iran he will be tossed into trash can of history
A president's word
Iran has another way to circumvent the red line. The current pace of uranium enrichment to 20% purity level is 15 kilos a month. If more than 200 kilos of this uranium are accumulated, the leftover material is used to make nuclear fuel rods. At least some of these rods will be used to activate the heavy water reactor in Arak. After about a year or two, when these rods will be worn out, Iran will be able to produce plutonium from them, through a chemical process. Plutonium, like enriched uranium, can also be used as fissile material to produce an atomic bomb. In this way, Iran is not crossing Netanyahu's red line, but at the same time it is creating an infrastructure for the production of nuclear weapons with plutonium, alongside the uranium enrichment process, where most of Tehran's efforts are concentrated. A third reason for Iran's new flexibility is the lessons it learned from the Syrian chemical weapons crisis. Obama blinked at first, but he did display enough seriousness in his intention to use force against Assad and prompted Putin to propose a diplomatic solution. Apparently, now that they are so close to their nuclear goal and are suffering from the sanctions, the Iranians do not want to put the American president to another test, particularly when there is a consensus in Congress regarding Iran's nuclear program. Due to all of these reasons, the regime in Tehran is indicating that is willing to make concessions on a number of issues. 1. Rohani is hinting that he is willing to increase "transparency," a code word for increasing the supervision of the IAEA on Iran's nuclear program, including unscheduled visits to the uranium enrichment facilities in Qom and Natanz, the reactor in Arak, and perhaps even to sites where Iran is developing nuclear weapons, such as the Parchin military complex. While such a concession would not take away Iran's achievements in the nuclear field, it is enough to prevent a quick "breakout" towards an atomic bomb without the West's knowledge. The problem: Iran can decide at any moment to expel the inspectors and announce within weeks that it is in possession of nuclear weapons. Such a development would force the West to decide quickly on military action, but the Syrian crisis has shown us that this is highly unlikely. Once they have a bomb, the Iranians will be much more protected from an attack. The US is hesitant to attack North Korea for exactly the same reason. 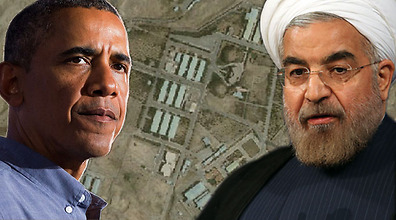 2. Stop or limit the enrichment of uranium to 20% and transfer the material that has already been enriched to this level outside the country. Seemingly, such a move should be sufficient for Netanyahu, but there is an obstacle here as well: With the amount of centrifuges that will soon become operational, Iran should have no problem taking the low-enriched uranium (3.5%-5% concentration of U-235) it has accumulated, enrich it all at once to the necessary purity level, and build a nuclear weapon within two months.

3. The Iranians leaked the German weekly Der Spiegel that they are willing to shut down the facility in Fordo. But even if they do, this would not seriously hurt the uranium enrichment program. Only 3,000 of Iran's 17,000 centrifuges are installed in Fordo. Even if they are deactivated, the remaining 14,000 centrifuges, including highly advanced ones, will continue to spin in Natanz. When examining the signals that Iran is willing to make concessions, it is easier to understand Khamenei's important remark to the Revolutionary Guard commanders: "Sometimes a wrestler shows flexibility for technical reasons but he doesn't forget who his opponent is and what his real goal is." No wonder Netanyahu and Defense Minister Ya'alon saw all the warning lights flash. Of course, Jerusalem prefers a diplomatic solution, but it fears that the Europeans, Russia and China, as well as the US, will compromise on the outline Rohani is currently alluding to. Not because the Americans and Europeans are naïve or wicked, but because of the basic difference in the approach to the nuclear threat: Following Obama's visit to Israel last March, the trust between the Israeli and American leaders was restored and they reached understandings. It is safe to assume that in any case there will be cooperation – even if Israel attacks – including a diplomatic umbrella on the day after. But the fundamental gap remains. The fear that sanctions will be eased in light of Iran's conciliatory statements has prompted Netanyahu to outline four conditions which he said must be met "to stop Iran’s nuclear program." Netanyahu specified them as "Halting all uranium enrichment; removing all enriched uranium; closing (the uranium enrichment facility at) Qom; and stopping the plutonium track," which is being pursued at the Arak reactor. Netanyahu said that "until all four of these measures are achieved, the pressure on Iran must be increased and not relaxed." Netanyahu's words were most likely meant for the ears of the members of Congress, so they will not let Obama get carried away by Rohani's overtures and urge the president to increase the economic pressure on Iran and impose additional, more severe sanctions. The Israelis are also telling their American counterparts that just like in the case of the Syrian crisis, a credible military threat is needed in order to get results on the diplomatic track. Israel knows how close Iran is to a nuclear bomb, and this is causing a significant amount of nervousness. However, Israel still hopes the negotiations will bear fruit and has pledged not to sabotage the Obama administration's efforts to exhaust the diplomatic option. At the same time, Israel's leaders haven't said that the military option has been taken off the table, so everything is still open, but not for long.