Brigadier-General Zaher al-Sakat, a former chemical weapons chief in Syrian President Bashar al-Assad's army, says he was ordered three times to use chemical weapons against his own people, but could not go through with it and replaced chemical canisters with ones containing harmless bleach.

The general insisted that all such orders had to come from the top – President Assad himself – despite insistent denials by the regime that it has never used chemical weapons.

In an interview with The Telegraph last week, Sakat claimed to have his own intelligence that the Syrian president is evading the terms of a Russian-brokered deal to destroy his chemical weapons by transferring some of his stocks to his allies – Hezbollah, in Lebanon, and Iran.

According to the British newspaper, Gen Sakat's personal history gives new insight into the extent to which, it is said, the Assad regime gradually turned to the use of chemical weapons, despite angry public denials, after rebels encroached on Damascus and Aleppo, the country's two biggest cities, in the summer of last year.

As chief scientific officer in the army's fifth division, he ran chemical weapons operations in the country's southern Deraa province, where the uprising began in March 2011. He told The Telegraph he witnessed the first uses of violence against peaceful protesters – and the first use of "dirty tricks," placing weapons in the mosque where the protests started to suggest the protesters were armed. 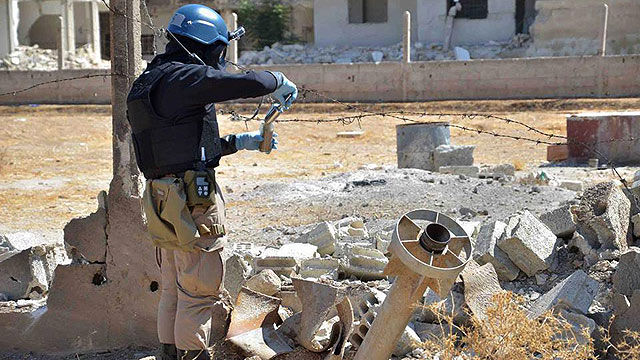 Gen Sakat said the regime wanted to "annihilate" the opposition using any means, and said he received his first orders to use chemical weapons in October last year. On three occasions, he said he was told to use a mixture of phosgene and two other chlorine-based agents against civilian targets in Sheikh Masqeen, Herak, and Busra, all rebel-held districts.

However, under cover of darkness, he said he had replaced the canisters containing the chemicals with ones containing water mixed with dilute bleach which would give off a similar chlorine smell. At first, his trick worked. "They were completely convinced that this was the same poisonous material," he told the Sunday Telegraph in an interview. "In this way I saved hundreds of lives of children and others." But after the third occasion, in January, his bosses became suspicious at the lack of deaths in his "attacks" and he began to plot his escape to Jordan, where he has been based since the spring. Gen Sakat believes chemical weapons have now been used 34 times, rather than the 14 occasions cited by international intelligence agencies. But he agrees with a variety of assessments that differing substances and concentrations are used, which would account for the differing death rates, with some attacks killing very few or none. Although phosgene has been banned internationally since the 1920s, it is much less potent than sarin, the chemical now known to have been deployed in Ghouta. The army was concerned not to use the most dangerous chemicals in the far south because of its proximity to Israel, Gen Sakat told The Telegraph. General Sakat said that even before the deal to disarm Syria of its chemical weapons was finalized, "they (Assad regime) were already mobilizing them to move to Lebanon and even Iraq. There have already been weapons handed over to Hezbollah."

Gen Sakat told The Telegraph a team of his activists had observed a column of more than 20 vehicles, some identifiable as belonging to the program, heading towards the Lebanese border. He also alleged that other stocks were being transferred through Iraq to Iran.

"They saw these shipments start before (Russian Foreign Minister Sergei) Lavrov appeared and mentioned the deal," he said. The Telegraph quoted a retired Israeli Major-General and former attaché to Washington, Gadi Shamni, as saying: "I am positive they're already trying to move things from one location to another to hide it. "It will be very hard to cheat in one week. But November is a very long time away – in winter, the sky is cloudy, and visibility is low. US satellites cannot be very effective – it's a very problematic issue and the Syrians understand it very well."