IDF soldier killed in Hebron laid to rest in Haifa

Thousands joined funeral of Staff Sergeant Gal Kobi who was killed in Hebron. His commander eulogized: He was admired by both soldiers, commanders. Minister Bennett: Gal's murderers will be severely punished

Staff Sergeant Gal (Gabriel) Kobi, who died after being shot in Hebron, was laid to rest Monday afternoon in Haifa's military cemetery. Thousands, including dozens of Givati soldiers, attended the funeral. His father Ovad recited Kaddish together with Gal's brother Or'el, and his mother Smadar could not believe the reality, saying "it cannot be true, they did not take you away from me."

Kobi's Battalion Commander Lieutenant A. said: "The choice to be a combat fighter is not obvious. It is a choice that says a lot of about Gal, about the values by which he was brought up, and the house he was raised in. He was a leading soldier, admired by his soldiers and commanders. While protecting the Jewish settlement in Hebron, he died." Chief IDF Rabbi Brigadier-General Rafi Peretz was also present at the funeral.

Minister Naftali Bennett represented the government at the ceremony, and eulogized: "I have no words of comfort; again we stand and cry about the loss of a son who will never return. Around us is a sea of hate. Our neighbors teach kindergarten kids to kill Jews. Some want us to drop our weapons and run away. Make no mistake, we will not put down our weapons and will not blink. Even our tears, in Bat Yam, in Hebron and in Haifa will not deter us from building." 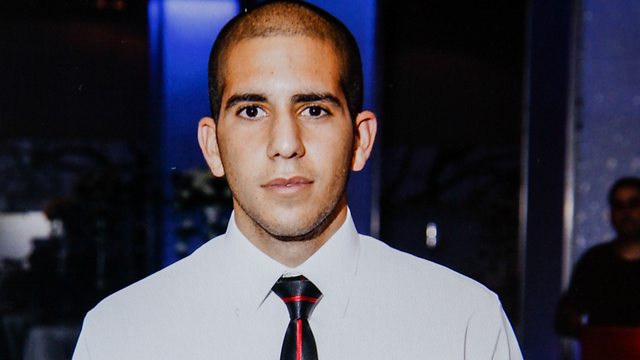 Bennett addressed the issue of prisoner release, as part of the resumption of negotiations with the Palestinians: "We must stop giving our enemies the sense that Jewish blood is the cheapest commodity in the Middle East, that there is no punishment for it, that there is no pardoning of car thieves but there is release of murderers of Jews. We will fight to eradicate this perception that killers can be released out of the blue. Gal's murderers will be severely punished, and I promise we will act with all our force to not even have the option to ever release them."

Kobi's uncle, Ami Azulay, also spoke at the funeral: "Gal, you are not alone. You are a flower surrounded by many flowers, soldiers and civilians. They are beside you in the land of Eretz Yisrael. You walked in a place that is holy to Am Yisrael, where you gave away your soul. You walked on a holy day, a holiday. Great souls are taken away on such days. I saw the tears of the soldiers that brought you and I knew, we were all Gal."

He told the crowd that Kobi's grandmother was hospitalized after receiving the bad news about her grandson. Kobi's peers from school and the army gathered around the new grave and cried copiously.

Kobi was killed by a Palestinian sniper in the vicinity of the Cave of the Patriarchs in Hebron. He took a single bullet to his neck and was evacuated in critical condition to Shaare Zedek Medical Center in Jerusalem, where he died of his wounds shortly after. Following the shooting, police and army forces set up roadblocks in the area in attempt to locate the shooter.