Though the chief of staff deemed it a "tragic coincidence," right-wing ministers believe the murder of Sergeant Tomer Hazan and the shooting of Staff Sergeant Gal Kobi in Hebron prove the failure of the prisoner release for resumed peace talks equation.

In an unusual joint action, seven ministers addressed Prime Minister Benjamin Netanyahu in a letter and demanded of him to convene the cabinet for a renewed debate over further releases of Palestinian prisoners. 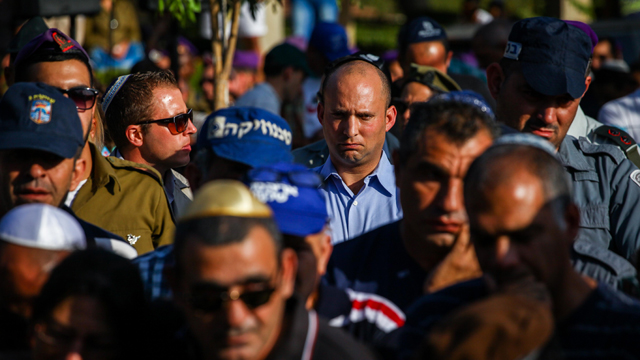 In the letter, titled "a renewed cabinet discussion on the prisoner release policy," it was written: "Over the last few days we witnessed two murders, which claimed the lives of two IDF soldiers – late Sergeant Tomer Hazan and late Staff Sergeant Gal Kobi.

"In light of the above, we ask you to convene the cabinet as soon as possible. This, in order to further discuss the policy of prisoner release in light of recent developments."

"We should make it clear to the Palestinians: Where there's shooting – there's no talking," said Minister Orbakh. "With one hand they demand and receive murderous terrorists, and with the other their henchmen keep terrorizing and murdering. We'll demand the government to reopen the peace talks' outline for discussion."

Agriculture Minister Yair Shamir noted the Hebron shooting was not followed by any condemnation or sympathy from the Palestinian Authority. "I'm not even talking about punitive measures," he said. "The Palestinian leadership is harming the (peace) process with their silence, in light of this heinous terror attack."

During Gal Kobi's funeral, held Monday afternoon in Haifa, Bennett, attending as the government's representative, also commented on the prisoner release issue: "We must stop giving our enemies the feeling that Jewish blood is the cheapest commodity in the Middle East, which carries no penalty, that car-thieves can't be pardoned but murderers of Jews can.

"We'll fight to uproot the conception that murderers can be released out of nowhere. Gal's murderers will be severely punished, and I promise we'll do everything in our might to prevent even the possibility of their release."