Draft resolution legally obligates Assad regime to give up chemical weapons but does not threaten military force if it fails to comply. Washington Post: US, Russian officials believe Syria WMDs can be neutralized within nine months

WASHINGTON - The five permanent members of the deeply divided UN Security Council reached agreement Thursday on a resolution to eliminate Syria's chemical weapons, a major step in taking the most controversial weapon off the battlefield of the world's deadliest ongoing conflict.

The draft resolution's demands that Syria abandon its chemical stockpile and allow unfettered access to chemical weapons experts are legally binding. But if Syria fails to comply, the council will need to adopt a second resolution to impose measures under Chapter 7 of the UN Charter, which allows for military and nonmilitary actions to promote peace and security.

Nonetheless, after 2 1/2 years of inaction and paralysis, the agreement represents a breakthrough for the Security Council and rare unity between Russia, which supports Syrian President Bashar Assad's government, and the United States, which backs the opposition.

Russia and the United States jointly introduced the text to the 10 non-permanent council members Thursday night, supported by the other permanent members, Britain, France and China. A vote on the resolution depends on how the full council responds to the draft, and on how soon an international group that oversees the global treaty on chemical weapons can adopt a plan for securing and destroying Syria's stockpile. The Russia, US and British ambassadors said the executive board of the Organization for the Prohibition of Chemical Weapons may meet Friday in The Hague, Netherlands to agree on a document setting out its exact duties. This would enable the Security Council to possibly vote late Friday at the earliest, the ambassadors said. The UN resolution will include the text of the OPCW's declaration and make it legally binding, so the OPCW must act first. The spark for the recent flurry of diplomatic activity was the Aug. 21 poison gas attack that killed hundreds of civilians in a Damascus suburb, and President Barack Obama's threat of US strikes in retaliation. 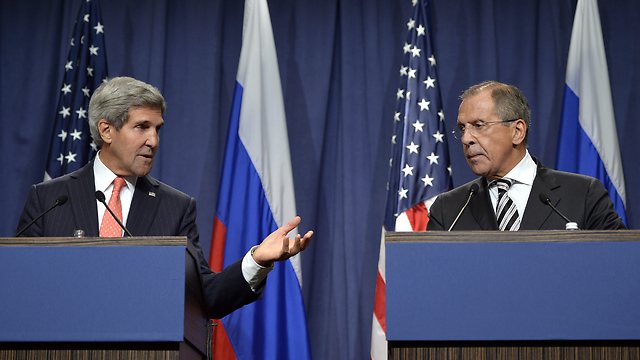 After US Secretary of State John Kerry said Assad could avert US military action by turning over "every single bit of his chemical weapons" to international control within a week, Russia quickly agreed. Kerry and Russian Foreign Minister Sergey Lavrov signed an agreement in Geneva on Sept. 13 to put Syria's chemical weapons under international control for later destruction, and Assad's government accepted.

"Just two weeks ago, tonight's outcome seemed utterly unimaginable," US Ambassador Samantha Power told reporters after the Security Council meeting. "Two weeks ago the Syrian regime had not even acknowledged the existence of its chemical weapons stockpiles." She said the resolution's adoption would mark the first time since the Syrian conflict began in March 2011 that the council has imposed binding obligations on Syria of any kind. "If implemented fully, this resolution will eliminate one of the largest previously undeclared chemical weapons programs in the world," Power said. Britain's UN Ambassador Mark Lyall Grant and a senior US State Department official described the draft resolution as "binding and enforceable."

But the draft resolution, obtained by The Associated Press, makes clear there is no trigger for enforcement measures if Syria fails to comply. The Russian, US and British ambassadors confirmed that this would require a second resolution. But Lyall Grant said the strong language in the text -- that the council "decides" that the Security Council will "impose measures under Chapter 7 of the United Nations Charter" in the event of non-compliance -- requires members to act.

Negotiations on the draft resolution were tough, especially on the Chapter 7 issue. Russia and China have vetoed three previous Western-backed resolutions aimed at pressuring Assad to end the violence, but the chemical weapons attack proved to be a turning point. Lyall Grant called the draft "a groundbreaking text" because for the first time it would make a determination that "use of chemical weapons anywhere constitutes a threat to international peace and security," which sets a new international norm. In a clear reference to Russia, he added, "if Assad thought he could hide behind certain members of the Security Council, he will have to think again."

Lyall Grant said there were compromises and Britain would have liked much stronger language on the abuse of human rights by the regime and a decision by the council to refer perpetrators of chemical weapons attacks to the International Criminal Court to be prosecuted for war crimes. Diplomats said this was discussed but Russia objected. As a result, the draft says only that the Security Council "expresses its strong conviction that those individuals responsible for the use of chemical weapons in the Syrian Arab Republic should be held accountable." The draft resolution would ban Syria from possessing chemical weapons and condemn "in the strongest terms" the use of chemical weapons in the Aug. 21 attack, and any other use. It also would ban any country from obtaining chemical weapons, or the technology, or equipment to produce them from Syria. It authorizes the UN to send an advance team to assist the OPCW's activities in Syria. It asks Secretary-General Ban Ki-moon to submit recommendations to the Security Council within 10 days of the resolution's adoption on the UN role in eliminating Syria's chemical weapons program. The council would review compliance with the OPCW's plans within 30 days, and every month after that. The draft resolution strongly backs a political transition in Syria. It would for the first time endorse the roadmap for a transition adopted in June 2012 in Geneva by key nations, and call for an international conference to be convened "as soon as possible" to implement it. The roadmap for a political transition starts with the establishment of a transitional governing body by mutual consent with full executive powers and ends with elections -- but there has been no agreement on how to implement ends with elections, but there has been no agreement on how to implement it, which would require Assad to relinquish power at some point. The draft also calls on "all Syrian parties to engage seriously and constructively" at a new Geneva conference and be committed "to the achievement of stability and reconciliation." A new Geneva conference has been stalled by difficulties in uniting the opposition and getting a Syrian delegation to the negotiating table, but Russia's UN Ambassador said "the work on that track is continuing very actively." Lyall Grant said as soon as this resolution is adopted, Britain will push very hard for council action to demand improved access to Syria for humanitarian agencies and workers. Meanwhile, the Washington Post reported on Friday that US and Russian officials believe the vast majority of Syria’s nerve agent stockpile consists of “unweaponized” liquid precursors that could be neutralized relatively quickly, lowering the risk that the toxins could be hidden away by the regime or stolen by terrorists. The report said a confidential assessment by the United States and Russia also concludes that Syria’s entire arsenal could be destroyed in about nine months, assuming that the regime in Damascus honors promises to cede control of the chemical assets to international inspectors.

The Washington Post said that in private briefings to weapons experts, White House officials said analysts had concluded that Syria possesses more than 1,000 metric tons of chemical weapons, of which about 300 metric tons are sulfur mustard, the blister agent used in World War I. Nearly all of the remainder consists of chemical precursors of nerve agents, described as being “unweaponized” and in “liquid bulk” form, according to two people who attended the White House briefings.