New book sheds light on Rudolph Hess' 'deranged solo mission' to Britain, claims he brought with him treaty under which Nazis would withdraw from Western Europe

Rudolph Hess’ journey to Britain by fighter aircraft to Scotland in 1941 has traditionally been dismissed as the deranged solo mission of a madman, but a new book claims Adolf Hitler’s deputy brought with him from Hitler a detailed peace treaty, under which the Nazis would withdraw from western Europe, in exchange for British neutrality over the imminent attack on Russia.

The Telegraph said that in the book, historian Peter Padfield says a document that sheds light on the peace offer was revealed to him by an informant who claims that he and other German speakers were called in by MI6 to translate the treaty for Churchill.

The informant said the first two pages of the treaty detailed Hitler’s precise aims in Russia, followed by

sections detailing how Britain could keep its independence, Empire and armed services, and how the Nazis would withdraw from western Europe. The treaty proposed a state of “wohlwollende Neutralitat” – rendered as “well wishing neutrality,” between Britain and Germany, for the latter’s offensive against the USSR. The informant even said the date of the Hitler’s coming attack on the east was disclosed. 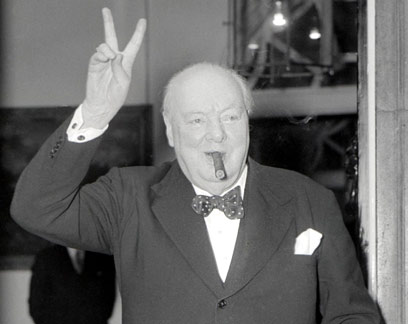 'A turning point of the war.' Churchill (Photo: EPA)

Padfield, who makes the claims in a new book, Hess, Hitler and Churchill, said: “This was not a renegade plot. Hitler had sent Hess and he brought over a fully developed peace treaty for Germany to evacuate all the occupied countries in the West.”

The Telegraph said Padfield, who has previously written a biography of Hess as well as ones of Karl Dönitz and Heinrich Himmler, believes the treaty was suppressed at the time, because it would have scuppered Churchill’s efforts to get the USA into the war, destroyed his coalition of exiled European governments, and weakened his position domestically, as it would have been seized on by what the author believes was a sizeable “negotiated peace” faction in Britain at that time. At the same time, since the mission had failed, it also suited Hitler to dismiss Hess as a rogue agent.

The British newspaper said there is no mention of the treaty in any of the official archives which have since been made public, but Padfield believes this is because there has been an ongoing cover-up to protect the reputations of powerful figures.

“This was a turning point of the war. Churchill could have accepted the offer, but he made a very moral choice. He was determined that Hitler, who could not be trusted, would not get away with it. He wanted the US in the war, and to defeat Hitler,” Padfield said.

Hess was kept captive in Britain until the end of the war when he was returned to Germany to stand trial at Nuremberg. He was sent to Spandau Prison where he died in 1987. The authorities said he had committed suicide, although his son and some historians have claimed the British state had him murdered to protect secrets.