Police instructed by top echelons to motion for lifting of gag order on arrest of Ali Mansouri, who is suspected of trying to spy on Israel, police say in remand hearing

The timing of the exposure of the arrest of an Iranian spy in Israel was decided by Israel's top echelons, a police official suggested Monday.

Ali Mansouri, an Iranian-born Belgian citizen who is suspected of attempting to spy on Israeli and American facilities in Israel attended a remand hearing at the Petah Tikva Magistrates' Court.

During the hearing, the police representative admitted that police had been instructed by state officials to motion for a lifting of the gag order on the details of the affair. Mansouri's remand has been extended by eight days. 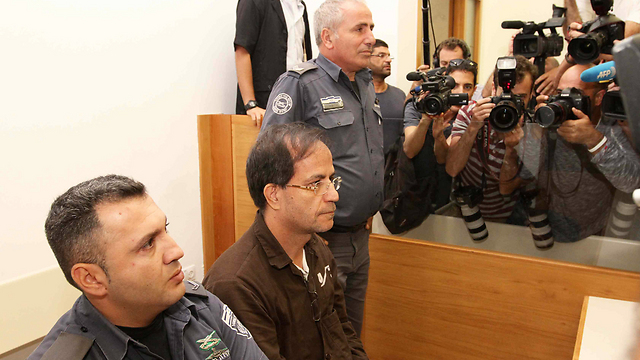 According to the investigation, Mansouri operated in Israel under the name Alex Mans and stayed at a hotel overlooking the US Embassy in Tel Aviv. From his room he had a clear view of the embassy and was instructed to follow security arrangements at the site.

The Shin Bet is looking into whether Mansouri had a chance to relay photos to his handlers and whether he was asked to photograph IDF bases, and monitor IDF security arrangements.

The investigation further revealed that Mansouri had covered up any traces of his Iranian background and his trips to Tehran. He was arrested at the Ben Gurion Airport before boarding a flight to Brussels, at the end of his latest visit to Israel which lasted five days.

According to the Shin Bet, the very fact that he was able to roam free in Israel caused damage to state security. It was nevertheless stated that his arrest prevented the establishment of an Iranian intelligence infrastructure in Israel.

"Since Israel is always trying to demonize Iran, the move came as no surprise," the paper said. "The announcement, which coincided with Israeli Prime Minister Benjamin Netanyahu’s trip to the US, was the Zionist regime’s first move in its plot to prevent a thaw in relations between Iran and the Wes."

It was further claimed that the "move, which is clearly in line with Israel’s propaganda campaign against Iran, received little coverage in the Western media." However, a review of news website showed the story had in fact received extensive coverage.