PM extends US visit for series of interviews; tells NBC 'keep sanctions up, that will prevent Iran from arming itself, and will prevent next war'

WASHINGTON – (The Iranian people) are governed not by (President Hassan) Rohani. They're governed by Ayatollah Khamenei. He heads a cult. That cult is wild in its ambitions and its aggression," Benjamin Netanyahu told NBC News' Andrea Mitchell on Wednesday.

The Israeli prime minister, who drew criticism over his speech before the UN General Assembly, was interviewed by five television channels the day after the address. In the interviews he reiterated his claim that Iran's conciliatory rhetoric was part of a ploy aimed at lifting Western sanctions while continuing to advance its nuclear program.

Netanyahu criticized Rohani's tone as duplicitous. "He calls the shots, Khamenei. (Rohani) tells him — he tells his boss, the dictator of Iran, 'I can get you the completion of the nuclear program by speaking nicely to the West. I can — what (former President Mahmoud) Ahmadinejad tried to do with a frown, I'll do with a smile,'" the PM said.

Netanyahu cautioned that the only difference between the two presidents is a difference in style, not policy, and that Iran's goal continues to be the development of nuclear weapons.

"Ahmadinejad was a wolf in wolf's clothing. And Rohani is a wolf in sheep's clothing. But it doesn't mean we should let him...pull the wool over our eyes," he told NBC.

In the interview, Netanyahu said he is open to a diplomatic solution that would dismantle Iran's nuclear program, but said the key was to maintain the pressure through sanctions and a credible military threat. 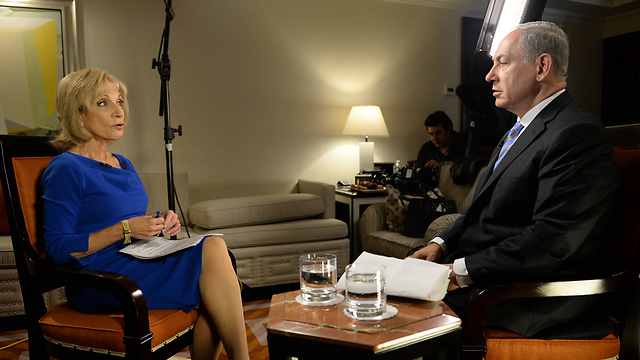 Netanyahu was also interviewed by CBS's Charlie Rose, who last month interviewed Syrian President Bashar Assad. Asked by Rose if he believes the Iranian regime can change, the Israeli leader said: "Rohani is a wolf in sheep's clothing, be we cannot let him pull the wool over our eyes. Can there be a real change? Maybe yes, maybe not. But the only way to find out is to insist on an agreement that truly dismantles Iran's nuclear program."

Speaking with Univision's Adriana Vargas, Netanyahu said Iran was developing nuclear weapons in order to wipe Israel off the map. "But they're not only threatening us. They're building intercontinental ballistic missiles. They have already missiles that can reach Israel. They're building these long-range inter-continental missiles to reach the United States, and they want to arm them with nuclear weapons.

The PM's media blitz is set to continue on Thursday with scheduled interviews for Fox and CNN.

During his speech at the UN, Netanyahu said Rohani "definitely wants to get the sanctions lifted; I guarantee you that. But he doesn’t want to give up Iran’s nuclear weapons program in return.

"Now here’s a strategy to achieve this. First, smile a lot. Smiling never hurts. Second, pay lip service to peace, democracy and tolerance. Third, offer meaningless concessions in exchange for lifting sanctions. And fourth, and the most important, ensure that Iran retains sufficient nuclear material and sufficient nuclear infrastructure to race to the bomb at a time it chooses to do so," the PM said. A New York Times editorial criticized Netanyahu's speech and accused the Israeli leader of trying to sabotage US President Barack Obama's efforts to resolve the Iranian nuclear crisis diplomatically. "Netanyahu has legitimate reasons to be wary of any Iranian overtures.. but it could be disastrous if he and his supporters in Congress were so blinded by distrust of Iran that they exaggerate the threat, block President Obama from taking advantage of new diplomatic openings and sabotage the best chance to establish a new relationship since the 1979 Iranian revolution sent American-Iranian relations into the deep freeze," the editorial stated.