Influential rabbi's death covered extensively by major foreign news outlets; some focus on his controversial anti-Arab and anti-gay remarks, while others mention his 'territories for peace' ruling

"Rabbi Ovadia Yosef, who has died aged 93, often resembled a medieval stranger marooned in the modern world," British newspaper the Guardian said in its report on the death and mass funeral of the influential Israeli rabbi and spiritual leader of Shas.

The rabbi's death, which set off a tremendous wave of public mourning in Israel, received extensive coverage in foreign media outlets. The UK's Daily Mail put Shas Chairman Aryeh Deri's reaction to the news of Ovadia's death in its headline: "What will become of us? Who will lead us? Who will take his place?"

The New York Times said: "Rabbi Yosef, instantly recognizable by his lush gray beard, gold-embroidered robe, turban and dark glasses, embodied a particular blend of religion, tradition, populism and ethnicity. As the leader of a Sephardic council of Torah sages that founded Shas in the early 1980s, he harnessed the underdog sentiment of many non-European Israeli Jews, worked to restore their pride and turned them into a potent political force." 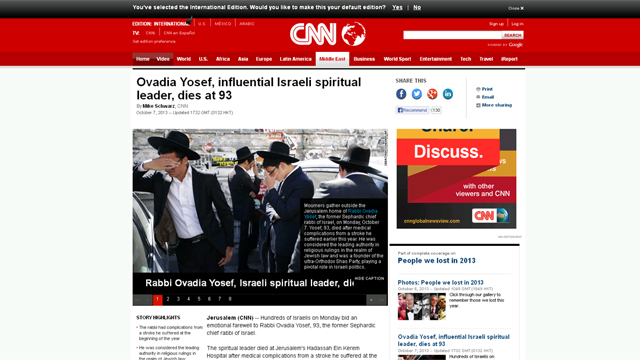 The Washington Post referred to the rabbi as a "kingmaker," saying that "through his control of the Shas political party, Yosef wielded influence over all Israelis. His death Monday leaves a gaping hole that could see the party splinter, reshaping Israeli politics yet again."

The American newspaper also said that among secular Israelis the rabbi was widely perceived as a "medieval figure, bedecked in flowing robes and occasionally given to bizarre rants."

The Washington Post said the rabbi's "ornate outfit, with a gold-trimmed black cape and upswept hat, combined with his ever-present dark glasses and habitually slurred speech, made him an easy target for caricaturists. He would greet visitors, whether they were simple followers or prime ministers, with a playful slap to the face."

The Daily Mail noted that Rabbi Ovadia was also known for "promoting peace talks between Israel and Palestine," while the Washington Post published his past remarks against the Palestinians. The rabbi referred to them as "evil, bitter enemies of Israel."

The Los Angeles Times said Yosef's public impact "extended far beyond his immediate constituency, and he had a hand in selecting several prime ministers and shaping many of Israel's coalition governments, though not the current one."

The Guardian mentioned that in August 1989 Rabbi Yosef ruled that Israel should relinquish parts of the biblical Land of Israel if that could prevent bloodshed and bring lasting peace. The BBC dedicated a large part of its article to Rabbi Ovadia's controversial comments on Arabs, women, secular Jews, liberal and gay people, but also mentioned that he "also encouraged Israeli politicians to engage in the peace process with the Palestinians and by abstaining, helped secure the passage of the first Oslo peace accord through the Knesset." Turkish newspaper Hurriyet chose to call the rabbi the "spiritual leader of the extreme right in Israel" and also mentioned his racist remarks against Palestinians. Al Jazeera made do with a short report on the rabbi's death and the funeral procession. "He wielded enormous influence among Israeli Jews of Middle Eastern and North African ancestry, and had frequently been a kingmaker in the country's fickle coalition politics," the Arab news network said.