The Royal Swedish Academy of Sciences announced on Wednesday that American-Israeli scientists Arieh Warshel and Michael Levitt, together with Austrian-American scientist Martin Karplus, have won this year's Nobel Prize in chemistry for laying the foundation for computer models used to understand and predict chemical processes.

The Swedish academy noted that their research in the 1970s has helped scientists develop programs that unveil chemical processes such as the purification of exhaust fumes or the photosynthesis in green leaves.

"The work of Karplus, Levitt and Warshel is ground-breaking in that they managed to make Newton's classical physics work side-by-side with the fundamentally different quantum physics," the academy said. "Previously, chemists had to choose to use either/or."

Warshel told a news conference in Stockholm by telephone that he was "extremely happy" to be awakened in the middle of the night in Los Angeles to find out he had won the prize and looks forward to collecting the award in the Swedish capital in December. 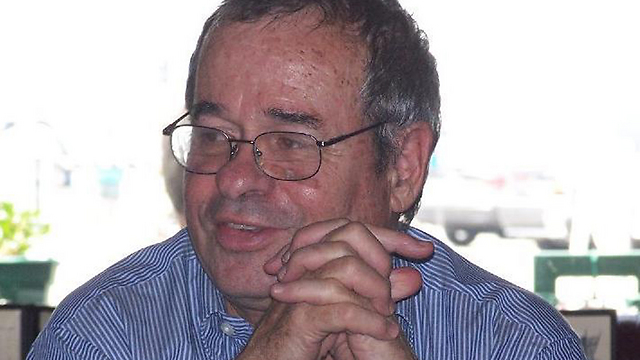 "In short, what we developed is a way which requires computers to look, to take the structure of the protein and then to eventually understand how exactly it does what it does," Warshel said.

In an interview with Israel Army Radio he described the moment he was informed of his win. "I got a phone call at 2:30 am. They didn't have to say anything, once the phone rang, I knew."

Asked about the role Israel plays in his identity he said, "I am partly Israeli. I visit Israel, I feel Israeli. My kids speak Hebrew."

His brother Yigal noted that he left Israel at the age of 34, after serving as a combat signal officer. "He was at the Weizman Institute but said he had better chances of getting ahead overseas, that the salary is better. He hasn't lived in Israel for 40 years. I once asked him whether he would ever come back – he said he wouldn't. I guess he's happy there." 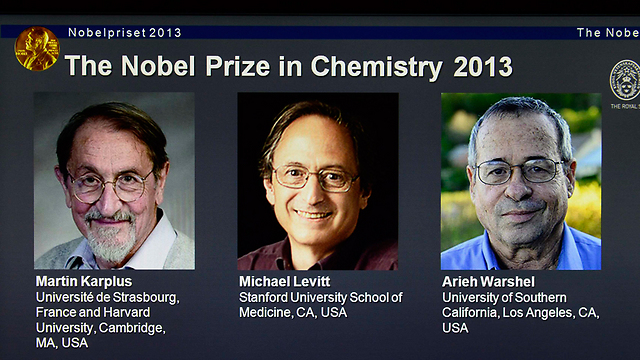 Winners of Nobel Prize in Chemistry (Photo: Reuters)
Warshel was born in Kibbutz Sde Nahum and studied at the Technion and the Weizmann Institute.

Prime Minister Benjamin Netanyahu phoned Prof. Warshel. "You're doing amazing things and it's exceptionally impressive. We're proud of you, proud of people who were in the Technion and in the Weitzmann Institute and promoted these places," he told Warshel.

Minister of Science and Technology Yaakov Peri also congratulated Prof. Warshel on his win. "Warshel continues in the unprecedented line of Israeli Nobel Prize winners, but at the same time he shines a light on the real national challenge of reversing the brain drain," he said.

Levitt, 66, who has American, Israeli and British citizenship, said after his win: "It was just me being in the right place at the right time and maybe having a few good ideas." Levitt won the prize together with Arieh Warshel and Martin Karplus for developing computer models used to understand complex chemical interactions.

"It's sort of nice in more general terms to see that computational science, computational biology is being recognized," he added. "It's become a very large field and it's always in some ways been the poor sister, or the ugly sister, to experimental biology."

Levitt was born in Pretoria, South Africa and moved to England at age 15. He arrived in Israel when he was 21 for his doctoral studies. Levvit and his wife Rina have three children. He divides his time between Israel and the US.

Potential candidates for the prize were also Israel Prof. Haim Cedar and Prof. Aharon Razin of the Hebrew University in Jerusalem.

Warshel and Levvit are the 11th and 12th Israelis to win the prestigious prize. Scientist Daniel Shechtman received the 2011 Nobel Prize in chemistry for the discovery of atom patterns called "quasicrystals."

In 2009, Israeli scientist Ada Yonath was awarded the Nobel Prize in chemistry for showing how ribosomes function, work that has important implications for antibiotics.

The Nobel week began on Monday, as the Nobel Prize for medicine was given to James Rothman of Yale University, Randy Sheckman of the University of California, and Thomas Sudhof of the Stanford University School of Medicine at Stanford University. On Tuesday, Peter Higgs of Britain and Francois Englert of Belgium won the 2013 Nobel Prize for physics for their discovery of the Higgs boson, about how subatomic particles that are the building blocks of matter get their mass.

The Nobel Prize was founded in 1895, and can be awarded only to people who are still alive. Every prize winner is also awarded with $1.2 million.