Analysis: If accepted, Tehran's offer to world powers will merely freeze nuclear activity until Khamenei decides to resume it

Washington and Jerusalem's initial assessments regarding Tehran's intentions were correct. The partial information coming in following the negotiations in Geneva indicates that the current Iranian leadership is in fact proposing a valid deal on its nuclear program. If in the past it was the five permanent members of the Security Council plus Germany that presented practical outlines for the resolution of the nuclear standoff and Iran stalled for time, now it is the other way around: Iran presented a pragmatic and supposedly fair outline for a deal that will be implemented quickly in three stages. The sanctions succeeded where diplomacy failed.

This is the essence of the Iranian proposal: Within 3-6 months Iran will stop or significantly reduce its activities related to uranium enrichment, which advance it toward obtaining the capability to produce a nuclear weapon in a short period of time. Tehran will also allow tight international supervision that will make certain it is living up to its commitments, in accordance with the agreement. In return, the six world powers will gradually remove the sanctions that are stifling Iran's economy.

But that's not all: Iran is demanding that the world powers officially recognize its right to enrich uranium and declare that its nuclear program is used solely for civilian and peaceful purposes. These two demands expose the "strategic landmine" in Iran's proposal.

The demand to recognize Iran's right to enrich uranium on its own soil is meant to allow the Islamic Republic to retain the capabilities it has accumulated thus far, so that in the future, if the regime in Tehran will decide to expel the UN inspectors and kickstart the development of nuclear weapons, it will be able to do so immediately. In this way, it will not have to rebuild its infrastructures for enriching uranium and developing nuclear weapons – they will already be in place – and Iran will be able to build a nuclear bomb and conduct a test within 8 to 10 weeks while the world powers try to decipher the intelligence information and consider their next move. 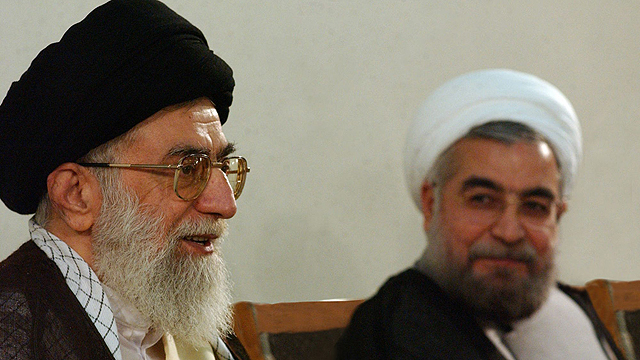 The demand that the world powers declare that Iran's nuclear program is for civilian purposes is meant to grant Iran full legal legitimacy. In such a legal situation, should Iran resume its military nuclear activity in the future, the world powers or the Security Council will have difficulties imposing new sanctions on Iran or enforce the ones that have been lifted.

The partial information that has been leaked about the Iranian offer confirms the sense that Iran has no intention of relinquishing the military capabilities it has obtained in exchange for the removal of sanctions. Tehran merely plans to temporarily suspend its nuclear activity until it will be able to resume its race toward a bomb in a more comfortable international environment – just as it did under former President Khatami in 2003 when the US invaded Iraq and overthrew Saddam Hussein.

The successful and charming Iranian negotiator at the time was current President Hassan Rohani. But in 2004, a year after Iran suspended its uranium enrichment and nuclear weapons development, when Supreme Leader Khamenei, Khatami and Rohani realized that the Americans were buried up to their necks and bleeding in the Iraqi mud, they resumed the nuclear military activity and even boasted about it. Now they are trying to do the same trick, this time when they are closer to the final goal – becoming a country that is on the threshold of attaining nuclear capability.

Therefore, according to information leaked from Geneva, the Iranians are not willing to dismantle the nearly 18,000 centrifuges that are installed in Natanz and Fordo (the underground facility near the city of Qom). Rather, they are willing to limit the number of centrifuges that actually enrich uranium. It should be stressed that not all of the centrifuges Iran has installed enrich uranium. What the Iranians proposed in Geneva allows them to keep the centrifuges operational until the time comes when they will want to reactivate them. 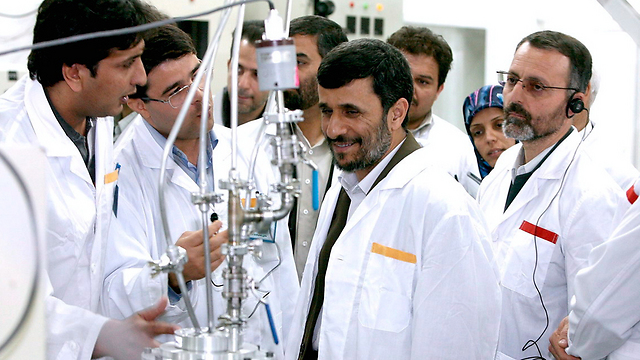 The Iranians also signaled in Geneva that they are willing to limit the number of advanced IR2 centrifuges, which enrich uranium 3-4 times faster than the old ones. Iran has installed nearly 2,000 of these centrifuges. A few of them are already enriching uranium.

The Iranians are also willing to stop enriching uranium to a medium level of purity (20%), but demand to continue with the enrichment of a limited amount of uranium to low level purity (3.5-5%). They are not willing to ship out their stocks of uranium enriched to low and medium fissile concentration levels. This means that whenever the Iranian leadership decides to achieve nuclear "breakout" capability, it will have in its possession at least seven tons of low-level uranium and some 180 kilograms of medium-level uranium, which is enough to build 5-6 nuclear warheads as powerful as the bomb that was dropped on Hiroshima.

With this amount of uranium, along with the operational centrifuges and the knowledge it has gained on how to assemble a nuclear bomb, Iran will be able to decide at any point in time to develop a nuclear weapon and achieve the goal within a few weeks.

Another large "carrot" the Iranians are offering the world powers is the tightening of the supervision on the implementation of the future agreement, including snap visits by inspectors to the nuclear sites. It is safe to assume that the Iranians mean what they say, but the supervision, as tight as it may be, does not guarantee that someday, when the international community will be focusing on another crisis, Iran won't expel the inspectors and race towards a bomb.

North Korea used this recipe at least twice to advance its nuclear program, and Iran has the advantage of being an energy superpower, meaning that any harm that is caused to it can lead to a spike in the price of oil and gas in the global market, which will negatively affect the economies of China and other Asian and African countries.

If accepted, the proposal Iran submitted in Geneva will result in the "freezing" of its nuclear program under tight supervision, but it will allow Iran to quickly resume and complete its nuclear weapons program, should it choose to do so in the future. In exchange for this moratorium, the painful sanctions imposed on Iran will be lifted and it will receive authorization to continue enriching uranium. As a bonus, Iran's diplomatic and trade relations with the US and Europeans will be restored, allowing it to regain its status as an important and active member of the international community.

Despite all this, there is room for optimism. Why? Because we must not forget that what the Iranians presented in Geneva is just the starting point from which they plan to conduct the bargaining. If this is the starting point, it is clear to the representatives from the bazaar in Tehran and to the representatives of the world powers that the finish line will be closer to the demands of the West than to the initial proposal.

While Russia and China are apparently willing to accept the Iranian proposal in principal, the US, Britain, France and Germany are demanding that Iran relinquish at least some of it capabilities in a way that will set its nuclear program two or three years back. All that needs to be done is apply pressure and insist, said a senior American official who asked to remain anonymous. The same official promised his Israeli interlocutor that Washington will examine in the coming days the technical and diplomatic implications of the initial Iranian offer and will take the approach that no deal is better than a bad deal.

The official told the Israeli that far as President Obama and Congress are concerned, the option of additional sanctions, as well the military option, are still on the table in case negotiations fail.