"Large protests, stone-throwing and damage to infrastructure are possible scenarios, but no one wants to get to that point. The trick is to prevent rioting. If we do not - then we have failed," said the commander of a special Israel Police unit in charge of the regulation of Bedouin settlement in the Negev – including the evacuation of illegal homes.

The Yoav Unit was set up ahead of the expected approval by the Knesset of the Prawer Bill, which is meant to relocate nearly 30,000 Bedouin to officially recognized communities in the Negev region, including Rahat, Khura and Ksayfe. Those who are moved are to receive financial compensation as well as new plots of land.

The plan has sparked fury in the Bedouin community, with those who are slated for evacuation claiming the implementation of the plan will violate their basic civil rights. In June a number of Arab lawmakers tore up copies of the Prawer Bill on the Knesset floor following a tense session.

The 110 officers of the Yoav Unit, which was set up in April 2012, will have to face this disgruntled population once the relocation plan is set in motion. The officers, who have been operating on the ground for the past four months, underwent physical and emotional training to prepare them for the task. The unit is expected to recruit another 250 officers. "During the evacuations, the officers are like fish – they don't talks to the residents," said the unit's commander, Chief Superintendent Yossi Golan. "The commanders use the influential people in the Bedouin community to calm the situation and help us deal with the women and children. And it works. But one mistake – such as an officer shoving a woman – can lead to a riot, and this is what we are trying to prevent."
צילום: דוברות מחוז דרום
X

The unit's job is to locate illegal homes, negotiate with the owners and assist in the destruction of the homes and the evacuation of the families. On average the officers find between five to eight illegal homes a day. Golan says the procedure requires the utmost restraint because the unit is dealing with people who are about to lose their homes.

Southern District Police chief Major-General Yarom Halevy said the Yoav Unit was given the tools to deal with the "complex and sensitive mission of population evacuation and the razing of illegal homes," adding "this should be carried out with minimum force and effort." 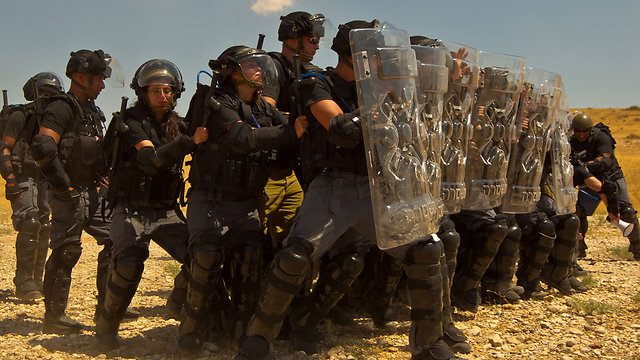 According to Halevy, the unit operates with "a high level of sensitivity and exceptional professionalism."

But Thabet Abu Ras, the director of Adalah's office in the Negev and a lecturer at Ben-Gurion University, criticized "the establishment of a special unit to deal with an essentially civilian issue," adding "unfortunately, all those who deal with the Bedouins view them as a security risk and a demographic problem. The unit's officers, he said "wield much more power than regular police officers. They can be judges, inspectors and police officers all at the same time. We've seen them on the ground, and they are brutal. They frighten the residents when they accompany the bulldozers. This happens every day." Israel Police dismissed the claims. Moran Avitan, 24, joined the unit after serving in the IDF's mixed Karakal infantry unit. "Evacuating people from their home isn't easy – regardless of religion, race or gender," she said. "Each house razing involves a lot of emotion. I hope we'll be able to reach a compromise with the Bedouin community." Another officer, Omri Yosef, said "over the past four months we've been able to display restraint and tolerance. Dozens of (illegal) homes have been destroyed, and dozens more have been located.

Chief Superintendent Yossi Golan added: "Should there be any confrontations or use of force against the law enforcement authorities, we will know how to respond accordingly. It won't be pleasant, but there is a strong police force here that will know how to uphold the rule of law."